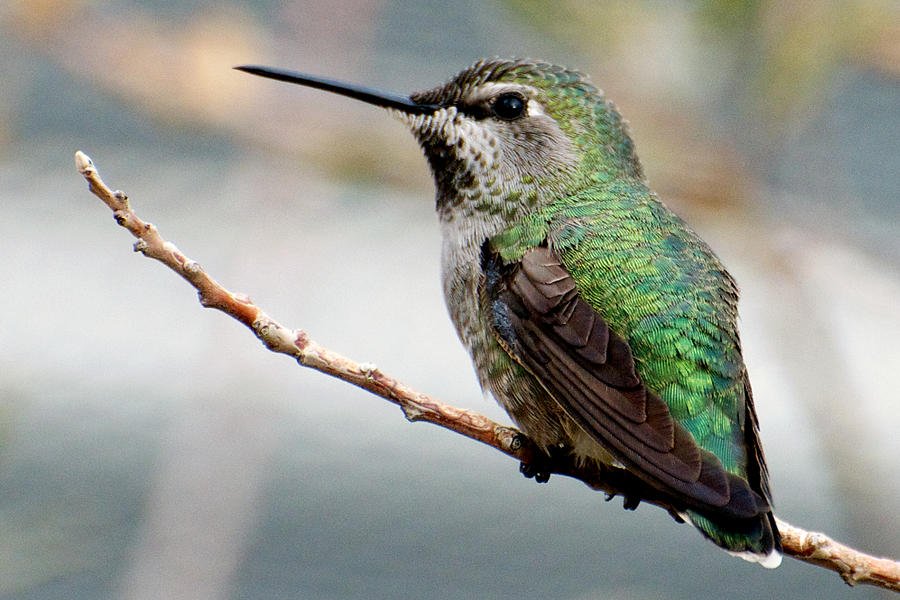 The five of us were standing around the kitchen counter in our condo last Friday night, the first evening of our annual spa weekend, examining the bottles of wine we had brought for the occasion. The sun was pouring through the window and through the open door of the patio on that beautiful late afternoon, and we were in great spirits anticipating our weekend together, when I noticed something out of the corner of my eye, flying right past us and circling back towards the window.  I immediately knew what it was, and turned towards it as it flew up to the ceiling and towards a very high skylight in the condo.  A beautiful little hummingbird.

Right away I began to worry, knowing that the little bird was going to have a heck of a time figuring out how to get back outdoors.  The door to the patio was still wide open, but the bird was determined to find its way out through that darn skylight instead.  It tried and tried, occasionally resting by clinging to a very tiny ledge at the side of the skylight.  And then it tried and tried again.

We didn’t know what to do, but someone had the idea of making some sugar water in the hopes that she (I’ve decided it was a ‘she’ by the pictures I have researched since), would get hungry enough to come down and drink it.  But all she could do was to flap at that skylight again and again.

We had reservations for dinner at the restaurant in the complex at 7pm, and by 6:45pm, she was still trying.  All we could hope for was that she would eventually get tired and come down.  I couldn’t get her off my mind as we walked to the restaurant and got seated inside.

After we’d been sitting and chatting for awhile, we realized that we had forgotten something back at the condo so I volunteered to take the walk back and get it, still worried about the little bird and thinking maybe I would find her somewhere where I could catch her and help her get outside.  I didn’t really believe that it was possible to catch something so small and so fast, but I was still hopeful.  When I got back to the condo, however, I still found her batting away at the skylight, so I retrieved what I was looking for and reluctantly locked up and made my return to the restaurant.

It was getting dark by the time dinner was over and we headed back to the condo.  As we entered I listened for the sound of her fluttering wings, but it was very quiet.  Someone turned a light on and I walked quietly over to the skylight and looked up.  She wasn’t there.  I knew she was in the room somewhere, so I gingerly tiptoed around looking on the floor behind the chairs and along the windowsill.  Then I heard a rustling sound.

She had hidden herself in some fake leaves that were lying in a pot containing a fake tree.  Her head popped up just as I got there, and I guess she was a little startled so she flew up to one of the branches in the tree.  She was within my reach so I knew I had to catch her now before she flew off somewhere higher.  One of my friends took a book and held it above her, and then gently, very gently, I cupped my hands above and below her and caught her just before she managed to fly off again.

Her wing stuck out of my fingers at first, but she pulled it back in, and I held her delicately as I walked towards the patio door that one of my friends had hurried to open.  I walked outside and decided that I’d try and carefully place her on the patio table.  But instead of letting me put her down, she found her way to my forefinger, and there she was, perched quietly and looking at me. I was in awe.

I whispered to her, “So you don’t want to go just yet, you want to stay with me?” She seemed quite calm and content, either that or she was still very tired from her earlier attempts at escaping.  But there she sat.  I’ve never had a hummingbird on my finger before.  She was so tiny and so beautiful and I didn’t want her to go.  Have you ever had one of those moments so beautiful you find yourself holding your breath and wishing you could hold onto it for just a little longer?

From behind me, someone suggested I take her over to one of the bushes near the patio, so I began to walk towards it.  And that’s when she finally fluttered off, disappearing into the night.  Wow.