A little over 7 weeks after the first sledgehammer came crashing down in our 70-year-old kitchen, we can finally say we’re finished.

When I first wrote about this process back in March, I really had no idea what we were going to experience, but I knew it was going to be stressful, frustrating, exciting and finally, satisfying.  I was right on all counts.

Thanks to Amy McGeachy, the host of “Trend” on CHEK Television, we figured out what choices we had to consider, looked at various remodelling options and narrowed down our picks for design, colours and materials.  She took us from the panic of “where do we start?” to the calm of “okay, THAT’S how it’s done.”  That was just the beginning.  Thanks to our contractor, Steve Burgess of Toolbox Renovations, we didn’t have to freak out over what to do when, and who to call.  He did it all.  Even the crappy little fix ups that we didn’t anticipate.  He was calm and cool, and most comforting of all, he knew what he was talking about.

You put a lot of trust in people when you start a project such as this.  Sometimes they come through with flying colours.  Other times, not quite so much.  So I thought I’d list some of the more memorable incidents.

Smashing things down and getting rid of the rubble is sometimes easier than installing new stuff. Two of the cabinets we got were very tall, narrow units that were pull out pantries.  When the boxes with all of the cabinets arrived, they barely all fit in the kitchen. But that wasn’t all of it.  The two enormous boxes with those pantry cabinets couldn’t fit in the house at all.  The delivery guys ended up leaving those boxes under the back porch.

The picture to the left shows the boxes that DID fit.  They took up the whole kitchen!

When the cabinet installer came, he was faced with how to get the pantry cabinets into the kitchen. We ended up opening a kitchen window, which was just wide enough to stuff the boxes through!

Needless to say, the only other option would have been to take the cabinets apart, which would have been a huge and costly task.  To the left is a picture of the units just after they were finally installed.

Another glitch was the new fridge.  When the appliances showed up, one of the guys looked REALLY doubtful as to how it was going to fit into that unit of pantry cabinets.  I freaked. First of all, they had to remove the doors and all of the contents to even get the fridge in the house. When he finally re-assembled it, I held my breath as he started to push it into its space. OMG. What a relief it was when I saw it just barely slide in! 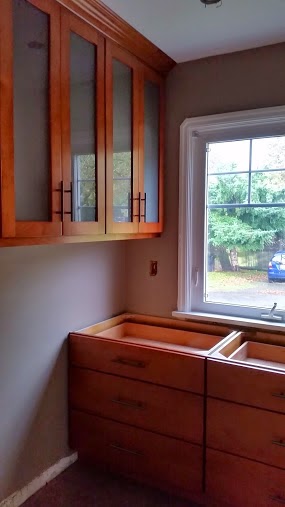 Another worry was the counter top in a corner area where my daughter does her baking.  We dubbed it the “baker’s corner”.  But it has an old window and the frame was going to be too low for the counter top to fit in over the new cabinets, so we actually removed a bottom part of the frame so it would slide under. 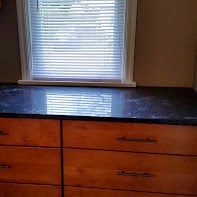 When the counter top guy came to measure, he suggested we shave another 1/8 of an inch off from under what was left of the frame so the counter would fit.   But we never did.  When they installed it, however, it worked. You can see in the picture what a tight squeeze it was. Another huge PHEW!

Yeah This Is Going To Be Messy

You anticipate mess.  When they tear the old kitchen apart, the dust flies everywhere.  When they sand down the drywall, more dust and mess.  But some messes are unexpected.  The guy who installed our cabinets, Fred, did it all himself. He’s a small guy and you wouldn’t think he could hold up some of those units, but I guess he’s used to doing it.  The whole installation took him only about a day and a half.  The last part was installing the “pullers” or handles for the cabinets. He drilled the holes and popped them in so fast I could hardly believe it!

But Fred had no instruction or equipment for the massive clean up after he was done.  There was sawdust left everywhere, all over the back deck, all over the driveway, even a bunch on my car.  The pile of boxes was enormous.  Tons of cardboard and styrofoam and bits and pieces everywhere.  We ended up having to pay a fee to dump everything ourselves.  We eventually brought that point up to the company that we got the cabinets from.  I’d have been happy to add the extra dumping fee to the cost and have them do the clean up for us!

For the most part, though, the guys who came to do the work did a very good job of cleaning up after themselves.  And if they didn’t, Steve did!

You really have to keep an eye on the project as it is progressing.  My husband and I learned to evaluate every day of work, and check out the design plans as we went along.  Little things came up, such as when a baseboard heater had to be moved to another wall.  That was no problem, the heater was replaced with a new, smaller one.  But when I looked at the design plans, and this was before we even had the cabinets, I realized that one of the drawers was going to smack into the heater when it was pulled out.  This meant replacing the heater with a totally different one that was flatter and would allow for the drawer.  Better to figure that out before the cabinets went in rather than after!


There is an order to all of it.  And one tiny delay messes up the whole order.  The first thing that I had to delay was the arrival of the new appliances.  That was mostly a simple case of phoning up Sears and finding a new date.  I had to do it twice because of various delays.  But one day we got the automated call that our appliances were arriving the next day…which was the original due date!  I frantically called Sears and found out that it was only one appliance, the microwave, that they had forgotten to change the date on.  So it wouldn’t have been a disaster if only the microwave showed up, but it sure caused some heart palpitations.

The final frustration was the delivery of the counter tops.  When we first ordered them, they told us that they would come in and measure when the cabinets were in, and that they would be delivered one to two weeks after that.  Sure.

They came to measure and then told is two to three weeks.  What??  Well, what can you do about it?  It was almost four weeks by the time the counters came.  Last Monday was the supposed delivery date.  By this time we were getting pretty fed up with washing dishes in the bathroom sink, and SO ready to have the counters and then the sink installed.  But the counters didn’t show up.  After some phone calls we found out that the head installer had a bad accident in the shop during the weekend and broke his jaw and lost a few teeth.

They were on a tight schedule as it was, so this put them even further behind in their installations.  Tuesday came.  I waited all day. Wednesday came.  Finally just after noon, they showed up.  I don’t know when I’ve been happier.  I even took a picture.

What shocked me most, however, was that the head installer, his jaw black and blue and missing teeth, actually showed up at the install! That’s dedication. At the right, I sneaked a picture of him. Just to prove he actually was there.

Oh yes I know when I was even happier.  I was ecstatic when the plumber finally came on Thursday to hook up our sink and our dishwasher.  YESSS!!!

We had new puck lights installed under the cabinets, and when they were first turned on, I thought they were simply beautiful!  Just having that little extra light on the counters was going to be perfect. I had visions of turning them on first thing in the morning when made my coffee instead of the bright main kitchen lights.  Too much light in the morning makes me cranky.

The first morning, however, when I got up and went to the kitchen to turn them on, they didn’t work. How frustrating is that?  I had to turn on the overheads, make my coffee and then I turned on the light to the basement and went downstairs.  That’s my office and teaching area, where I work and go to read my paper in the mornings.

A little later when I came upstairs, the puck lights were on!  Completely puzzled (and also stupid), I just decided maybe they had to warm up??  Maybe a wire was loose?  Nevertheless, I carried on with my day. That evening after I was finished work, I came upstairs and turned off the basement lights. My daughter came home from work and I wanted to show her the puck lights, so I turned them on again. Nothing.  I was so mad.  She decided to go downstairs and check the breaker panel (she has no fear of mechanical or electrical things).  I left the kitchen to do something else.  When I came back…TA DA! The puck lights were on!  She came upstairs and I said “What did you do?  You’re brilliant!”  She said she had done nothing, just looked at the panel.  We puzzled and puzzled.  Finally she went to turn the basement light off.  And the puck lights also went off.  Ahah!  We finally realized that somehow the wiring had gotten messed up with the basement lights.  The next day the electrician came back and corrected it.

Of course, our contractor Steve was ultimately responsible for all of those little bits and pieces and could often anticipate things before they happened.  More than once he had to fix a problem that was caused by someone not thinking, or a less than perfect job.  Like the exhaust pipe for the microwave that got jammed in the little cupboard above it, so he had to completely re-build it again to fit the parts on properly.  Or the tiny wire for the back doorbell that got left in a peculiar place against the wall by the counter top guys, with no way to move it or hide it.  He found a way to hide it.  He went even further and did extra little things, like putting in some door stoppers on all of the doors and new weather stripping on the back door.  He even blew a blood vessel in his eye making a hole to the outside wall for the microwave fan out take!

He was detailed and he knew how everything should come together.  He had to adjust his schedule many times because he wasn’t only working at our place.  He was on the phone, moving people around every time our timing got thrown off or an unexpected problem came up.  I can’t imagine what it would have been like without him.

This morning I walked into my new kitchen, turned the new puck lights on, got water from the new faucet to fill my coffee maker, opened the new fridge to get the cream, and emptied my new dishwasher of spectacularly clean dishes.  Aahhh….it’s done.

(PS…If you are not bored to death already and would like to read the previous parts to this story, they are here:  Rags To Kitchens Part 4, Part 3, Part 2, Part 1)