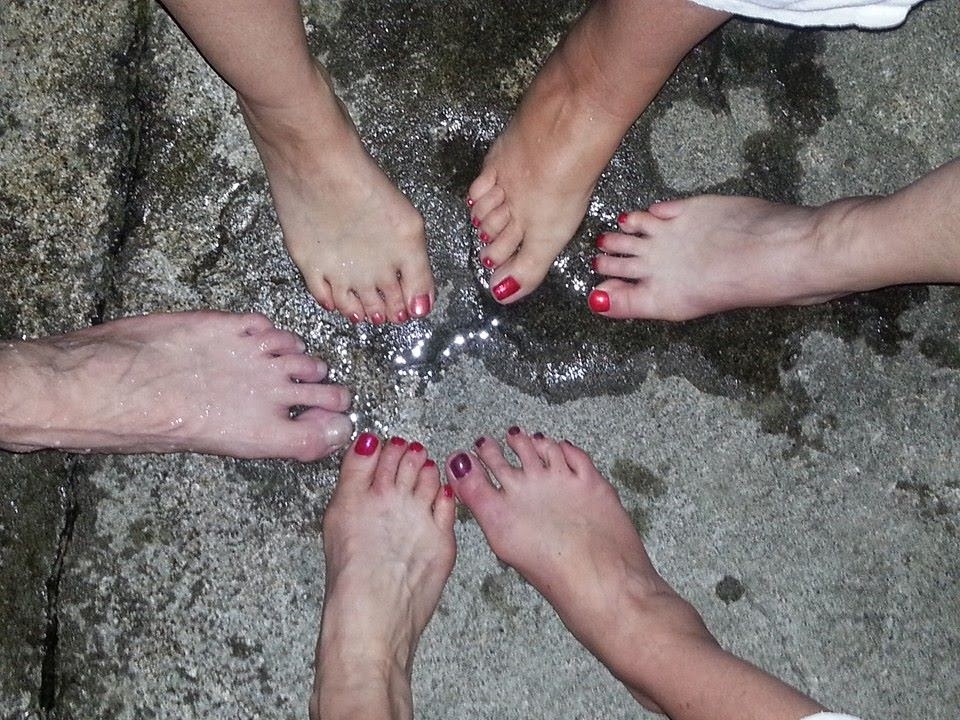 Every year when my friends and I have our weekend getaway at the spa, a part of the ritual is that we all get pedicures. Outside of the sore gut from laughing so much all weekend, the pedicure is the only sign we have in the following weeks that we’ve been anywhere special.  It’s a little reminder when you get up in the morning and look at your feet;  ah yes, I was at the spa a couple of weeks ago.  Even if it already feels like a year ago.

For the most part, we put away our smart phones and kind of disconnect from the rest of the world, although I notice a couple of us sneaking the occasional peek at their Twitter feed or Facebook during the weekend.  It’s a hard habit to break.  But much of the time we are caught up in the togetherness, the laughter and spirited conversation, the eating and drinking and “spa-ing”.

During the late afternoon on the Saturday, after we had returned from our spa treatments, I took a peek at my phone and got a text from my husband asking about the “feet pic”.  Every year, the five of us put one foot in to a circle and we take a picture of it.  My husband was expecting to see this year’s pic posted on Facebook.  I mentioned this to my friends, “…but honestly, I can never tell which year the picture comes from because it’s always the same!” I commented.  We had been eating home-made pizzas and downing some fine wine, and the conversation at the dinner table took an interesting turn.

How could we make this year’s picture different?  How might it “stand out” from the rest?  Someone suggested we find a man and have him put his foot in the picture along with ours.  Would anyone notice?  And the bigger question:  How would we find a man?

We usually head out to the outdoor hot tub in the evening before bed, so after clearing the table we ran off to don our bathing suits and fluffy, white spa robes.  The conversation about finding a man continued and a lot of giggling followed.  “You will be the one to find the man, Irene,” I was told.  Me?  I’m not sure how I was honoured (burdened) with this task, but I accepted, and out the door we went.

It was dark.  The only man we could see was a geeky, young maintenance guy, who surely would not have a “manly” foot.   We decided that if no other male was found, he would have to do.  So we trudged off to the hot tub, hoping against hope that there would be a male sitting in it.

He was sitting with another woman, and along with a couple of others in the hot tub, they were enjoying a relaxing soak.  He had no idea what I was about to ask him and I had no idea how I was going to approach him, but approach him I did.  The others shyly stood back as I brazenly walked around the edge of the sunken hot tub to where he was sitting.

I felt for him, really.  He looked kind of quiet and unassuming, and I was about to put him on the spot.

“Excuse me,” I began.  “I was wondering if you might be up to taking a picture with myself and these other ladies?”  He looked up at me questioningly, so I tried to explain.  “We really only want to take a picture of your foot alongside ours,”  I continued.  Behind me, my friends helped me explain the annual foot pic, and he graciously agreed to join us.

It turned out that one of our group recognized him and his wife, which made the strange request a little less suspicious, I suppose.  Especially for his wife 🙂

And so he stepped out of the steamy pool and we managed to organize the photo shoot. Afterwards we all plopped back into the hot tub, enjoying a long, sizzling soak on a cool, cloudless night.  Later, on the short walk back to the complex, we started to muse at what the response to the picture might be.  We couldn’t help getting excited at the possible scandal the picture might inspire.  What would they (our Facebook friends and family) think?  What would they say?  And when someone hit the send button and the salacious shot was finally posted for the world to see, we waited.

The wait began to get to us.  Perhaps people hadn’t seen it yet.  Maybe the foot wasn’t “manly” enough. Or could it be that people noticed the odd foot but were afraid to comment on it and insult somebody. Even worse, maybe nobody cared?

A larger, hairier foot might have stood out more.

Even the next morning as we packed up and loaded into the car for the drive home, there had been little response.  I finally became impatient enough to text my husband a small clue.  “Didn’t you notice?” When he finally did, and posted a leading comment on Facebook, we thought this would certainly put a fire under the scandal.

I think we’re going to have to put something even more scandalous in the picture next year.  Any ideas?