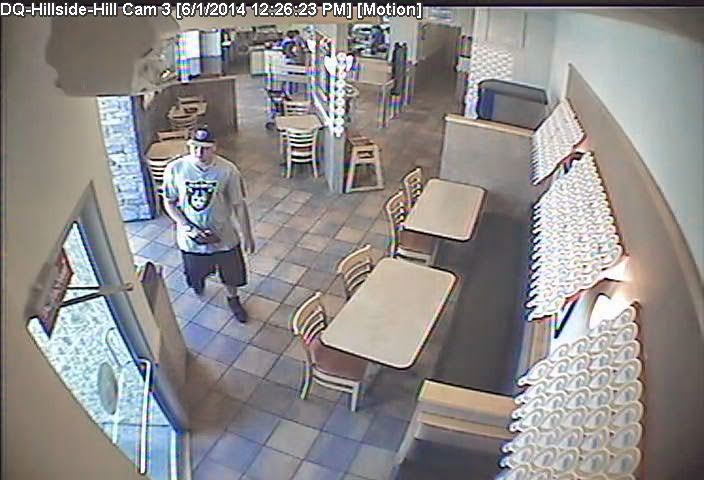 Who you are witnessing in the photo on the left is the guy who brazenly took my daughters iPad and iPhone as she was in the back of the store answering the work phone.  She had been sitting at a table on her break and had her gadgets with her.  I guess the temptation was too much for this guy when he saw them lying there on the table.  You can even see the iPad in his hot little hand.  We know who he is, because we all used social media and this picture to try and find him, but the police can’t do much about it unless they catch him red-handed.  At this point the devices may very well be in other hands by now.  It’s infuriating.

If you look carefully in the background, you can see a stroller, which contains his son.  The guy actually left his son in the store while he stole my daughter’s things.  This infuriates me even more.  His girlfriend and mother are at the counter, which is harder to see.  When he signals them from outside, they grab the stroller and leave without buying anything.  It was all a set up.

I’ve been robbed before a couple of times and I know how it feels.  It’s like someone has personally violated you.  It teaches you a few lessons, sure, but the anger that it brings up is unexpected and surprising the first time it happens.  Even if you’ve never had any violent tendencies in your life, this experience makes you want to hit someone.  Hard.

I had the same gut reaction when I was sitting with my daughter just after it happened;  she had called us and we immediately went to see her to get the whole story.  One of her co-workers said that she thought the family had all gone to the mall across the street afterwards.  My first reaction was to go to the mall myself and hunt for them, but my husband could see my fury and wanted me to cool down.  Eventually he gave in and off we went on the hunt, with no luck.

Afterwards my husband asked me what I would have done if we had found them.  I had had time to think it through while we were looking and decided I would have simply stalked them until I made them uncomfortable.  Then I would have suggested they call the police.  Or I would.  Ha!  But I never got the chance to pull my caper off.

The loss of a thing is not the worst experience in the world.  It’s just a thing.  Since this event, I’ve been thinking about who these people are and what would make them do what they did.  Not that there is any excuse, but maybe they don’t have a lot of money or are down on their luck or maybe this kind of criminal behaviour just runs in the family.  Who knows what their story is?  My family and I are not without compassion, and we understand that even though we are not independently wealthy, we have a lot more than many do.

I don’t expect my daughter will see her belongings again.  But if the guy is out there and sees this, all you have to do is bring the stuff back to where you took it from and we’ll let it go.  Just do it for yourself, and for your son, who is always watching you and what you do and who is going to live his life by your example.  Do you really want him to grow up to be a petty thief, or do you want something better for him?  Think about that, and then do the right thing.  Please.