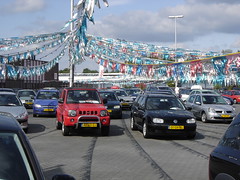 My hackles go up as soon as I see them coming. I do my best to steer clear of the beeline they’re making towards me, but I guess they’re used to being avoided and most of the time they catch up faster than I am expecting.

I keep my eyes on anything else…look at the lovely couch, oh, I think I need new ear buds, those red ones are pretty. Nice car.

But when they’re right in front of me, there is no more I can do to avoid them. I must engage.

Over the years I have developed an unhealthy attitude towards sales people, telemarketers, pitchmen and the like. I know that there are nice ones out there, but even they will almost never have a chance with me because I’ve already made up my mind that they are slimy snake oil salesmen before they have opened their mouths.

Several weeks ago I opened the front door to a young guy who I immediately was suspicious of. “How are you today?” he said. Lousy first line. I don’t want to tell an absolute stranger how I am today, why do they always ask that? He was young, inexperienced, and I guess that was the only way he knew how to introduce himself. I gave him a curt “Fine.” He knew that he was going to have to work hard to sell me anything after that.

Once more he tried to warm me up with a smile and a “Great weather we’re having…”. I rolled my eyes and shut the door.

I was torn between feeling bad that I had shut the door on him, and relieved that I didn’t have to deal with whatever he was trying to sell me. I immediately had a hot flash.

On a visit with my elderly parents once years ago, a young fellow knocked at the door and my father answered. I was within earshot and heard this young guy trying to get my Dad to give him money to help “fund” his “education”. Yeah sure. He would not give up. A lot of people are like my Dad, and they’re too polite, so these guys keep working them until they finally come up with some cash. But I wasn’t having any of it…I dashed to the door, surprising both my Dad and the visitor, and in a very assertive voice I said “He told you no the first time, now off you go!!” and closed the door. I’m sure it didn’t phase him, and he was off to harass someone else.

There are some store chains that are particularly notorious for their vulture-like sales people. I won’t mention the names here, because I’ll bet you thought of one right away as soon as I said that! The instant you walk through the door, they smell you and begin their approach. You are meat to them.

Yesterday I went with my daughter to look at a used car in a car lot not far from where we live. As soon as my foot hit the lot pavement, I swear some silent alarm went off somewhere…he was on me like a guided missile. I was quick enough to dart into the sea of cars and out of his path, but my young and less experienced daughter was not. He tried to put out his hand as he approached me, and it was my daughter who had to shake it. Well, at least I thought she did, but I had my back to them because I had no intention of making eye contact!

Why do sales people want to shake my hand? Do they think that we’re making a pact, and this will make me beholden to them to buy something? As far as I’m concerned, you shake hands after you’ve made a deal, not before. And I don’t want to shake hands with someone I don’t know, unless I am being formally introduced by someone I DO. Besides, I don’t know where that hand has been!

I turned around and said “I am just looking, and I don’t need any help, thank you.” And he took the opportunity to start his ramble “…we have more cars than the ones you see here…” but I was already off somewhere else. I didn’t see the car I was looking for, so we headed out. The sales guy was distracted by his next victim, thank goodness.

My daughter was furious. “Why were you so RUDE?” she asked. I tried to explain my despise for sales people, but she didn’t see that as an excuse. Later on when I was chatting with some of my friends at dinner, one of them said that the sales guys at that particular dealership were especially slimy…when she had taken a car for a test drive once, the fellow asked for her cellphone number, and then called her over and again for months after.

The worst of the worst are those in-home demonstration sales people. After our first child was born, we got a call from what we thought was a representative from the local fire department offering to demonstrate smoke alarms, so we set up an appointment. It turned out to be a woman who basically held us hostage in our own home for more than two hours, refusing to leave until she got a sale. She used every trick in the book…especially guilt. How can you not have smoke alarms in a house with a young baby? Well, we DID have smoke alarms, just not HERS.

She was so awful that it took us months to get over that experience. The fire department had approved the product, but they had nothing to do with the sale of it. That’s how they get in your door, these sleazeballs.

Okay, so now you can see how cynical and bitter I am. Two days after that young man came to my front door, I was watering my front flowerbed and noticed a little business card on the sidewalk. I picked it up and immediately remembered his visit. As it turned out, he was from a non-profit organization trying to draw attention to the cause, I guess.

On the card he had written “Cheer up…everybody has bad days.”

One thought on “Snake Oil and Sleazeballs”