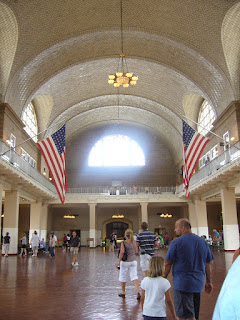 One of the highlights of my trip to New York, was a visit to Ellis Island.

I am here in North America, as many of us are, as a result of my recent ancestors’ immigration to this continent. In fact, if we all look back far enough, we are all immigrants.

Ellis Island was a place my father always told me about. My Grandfather John Jokumsen (who got frustrated with people being unable to spell his name, and changed it to Jackson), came across the Atlantic from Denmark all by himself on an old rust bucket of a ship nicknamed the Holy Oly. He was only 16 years old.

The reason he came was because he had a wealthy Aunt and Uncle who lived in Kalispel, Montana. They had offered my grandfather’s parents the opportunity for one of their 12 children (the “smartest” one) to come to the US, so that they could take him in and educate him.

And that’s how my grandfather, who was apparently the smartest one of the lot, got on the Holy Oly for that infamous trip to Ellis Island. It was 1912. And guess which other very famous ship was crossing the Atlantic at the same time? That’s right. The Titanic.

When my Grandfather’s ship pulled into the harbour at Ellis Island, they could see the lifeboats of the Titanic moored up to the docks. Can you imagine? The mightiest, “unsinkable” Titanic, didn’t make it, but the Holy Oly did. The photo above is the main hall on Ellis Island where every immigrant was processed before they were allowed into the U.S.

To make a long story short, my Grandfather did not take to his aunt and uncle very well, and ended up jumping on the rails and travelling all over the US and Canada by himself, working wherever he could and then moving on to the next stop. Eventually, he went back to Denmark and married my Grandmother, and brought her to settle in Canada. My father was born not long after they reached Calgary.

My mother was also an immigrant. She came to Canada via Montreal after a year’s tour on a Danish hospital ship, the Jutlandia, during the Korean War. She was a registered nurse, and had been banished from her family (long story), so she decided to move to Canada in 1954, because a lot of other Danes were doing the same during that time. And that’s where she met and married my Dad.

Here in Canada, we depend a lot on immigrants…if it weren’t for the growing immigrant population, our economy would pop like a balloon stuck with a pin because our birthrate isn’t great enough to sustain us. But, as has always been, there is a segment of the population who resent the “foreigners” “invading” our country, “taking over” all of the jobs that should be “ours”, etc., etc. When I listen to Lou Dobbs on CNN talking about the “alien” Mexicans invading the US, it makes me cringe. We forget that most of us are here because our ancestors were also immigrants, trying to find a better life in another country, full of hope for a better future. Maybe they don’t all do so in a legal, above board kind of way, but their intentions are almost always good. They are simply trying to help their families. Over hundreds of years, this is one ideal that hasn’t changed.

When I walked through that building on Ellis Island and saw the way the immigrants of those times were shuffled around like cows, marked with symbols on their clothes if they were blind or sick or poor, put behind bars if they were thought to be of dubious character, unable to defend themselves simply because they couldn’t speak the language, I felt a great deal of compassion. In the present day, there is no difference…people just want to find a way to do better, and we have no right to deny them that. Not really.

Ellis Island is now a museum. It is part of a tour that includes the Statue of Liberty…the ferry takes you from Battery Park in Lower Manhattan, over to the Statue of Liberty first and then to Ellis Island, and then back to New York. A part of me wondered how many people would actually get off at Ellis Island. Everybody did. Maybe they were just curious, maybe they didn’t know any better, or just maybe they were from immigrant families too, and knew the significance of the place. That’s what I’m kind of hoping.

2 thoughts on “We’re All Immigrants”