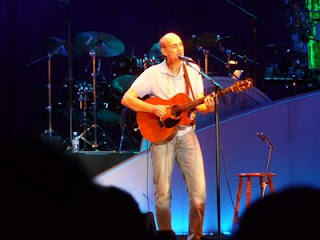 I guess I crossed something off my bucket list last night.

A couple of months back I heard that James Taylor was coming to Victoria. One of my big dreams in the last few years has been to see all of my songwriting heroes live. Aside from Joni Mitchell, he has to have been one of the greatest influences on my writing. He’s also been, in my opinion, one of the best interpreters of other’s songs over the years. “Up On A Roof”, “Handyman”, and of course “You’ve Got A Friend”, Carol King’s beautiful song, were all given that distinctive JT sound back in the 70’s when his star was flying high.

I’ve seen snippets of his concerts on TV and DVD, but of course seeing him live gave me a much better sense of his personality, his energy and his showmanship. He looks like he’s thoroughly enjoying himself up there. I’ve seen concerts where the band or the artist looked like they’d rather be anywhere else. One of my heroes who strikes me this way is Gordon Lightfoot. When I saw him for the first time only a few years ago, he was quiet, reserved and just let the songs do all of the work. There was a bit of a disconnect with Lightfoot but with James Taylor it was the complete opposite.

From a performing songwriter perspective, you realize the importance of that audience connection. Granted, last night we were all already sold on JT before we got there…but when you’re not known, creating that connection is absolutely critical. It endears you to your audience, gives them a sense of your human side, your sense of humour and your personality. You can’t just bow your head down and play the songs, you have to play them TO someone and let them feel for themselves where the songs came from.

JT is a fabulous guitar player, and on his old hits the sound guys let his fingerstylings stand out just as they did on the original recordings. He used two Olson acoustic guitars; a dreadnaught and a cutaway…I incorrectly quoted the price of them to someone last night, but they start somewhere around $12,500. Yikes. The sound of them is wonderful though, rich and bright.

It was a great turnout and he gave two encores, which were such a treat. I have to admit, I enjoyed his acoustic hits a little more, but that band of his was absolutely fabulous. I think it was his last night on his Canadian tour, so maybe we were just lucky to get a little extra out of them. Actually, the last encore appeared to be spontaneous…he ran to each member and whispered in their ear as if he had just decided to do one more.

And then there were the songs themselves. I wondered how many older hits he’d actually play, knowing how difficult it is to play the same songs over and over and still give them the energy they deserve, but he managed to do that so well. “Caroline On My Mind” and “Sweet Baby James” were real highlights for me, and of course he had to do “Fire and Rain”; that song is a staple in his bag of hits. The one that teared me up, though, was “You’ve Got a Friend”. He has a wonderful, rich baritone voice…not one note was out of place…it draws you in with it’s purity and resonance. I’ve often tried to emulate a female version of that voice and it was always James Taylor’s vocal that I was hearing while I was writing so many of my songs over the years.

So, JT, you helped an old 70’s girl to fulfill a dream last night. Thanks for coming to Victoria, thanks for all of your wonderful songwriting and performances over the years. You really are the best.