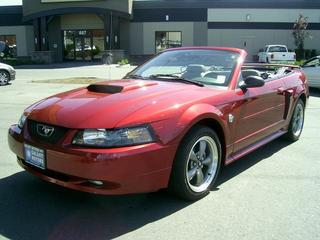 Well, there it is.

I would never have thought it, but because of an unexpected inheritance from my Uncle Ken, I was finally able to buy myself the convertible I’ve been coveting for so many years.  I kinda like to think Uncle Ken would be happy to know that I did something completely frivolous with part of the money I received from him.  He was a bit of an adventurer himself…loved boats and cars 🙂

The story of my love affair with this car has been well documented in this blog, so I won’t go into the history of it again, other than the fact that it was the summer of 2003 when I first rented one because it was either that or a big, burly Buick, which didn’t fit me well at all.  It was a 2004 Mustang convertible that I ended up renting that year…and wouldn’t you know?  The one I ended up buying is the same year.  Mine is a 40th Anniversary edition GT with a V8 engine, grey leather interior, and alloy wheels.

I’ve had it for about a week now and plan to take it on a cruise to the interior with my husband (I’m driving!) during the first week of August, just to give it a real road trip.