The toilet seat was cold, but I was so happy, I didn’t care. There was someone in the stall next to me who seemed a little odd, but I still didn’t care. Ahhhh….

When we first moved into our house 28 years ago, the only bathroom had swirly silver, pink and purple wallpaper, a purple shag carpet and a chandelier. I’m not exaggerating. The bathtub and toilet were pink, of course, and the whole room reminded me of a psychedelic 70’s drug trip.

Not that I’ve ever been on one of those.

Two weeks ago, the only thing that remained from the original bathroom was the pink bathtub. Over the years we had pretty much changed everything else except for that tub. 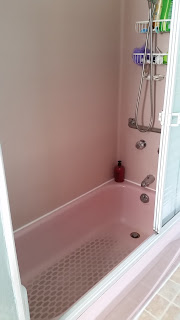 Yep, even the tub surround, which we put it to replace old tiles years ago, was pink.

You’ll see it to the left. I mean, it was okay. All I had to do every so often was to replace the cocking around the tub. But the sliding doors were starting to rust and there were some places I could never get clean enough.

We knew for quite awhile that we were going to get the bathroom updated, but the kitchen came first and that was a much bigger process and larger expense.

This spring we finally bit the bullet and got a quote. We’ve only ever had one bathroom, so we also got a quote on putting a second one in on the top floor of the house. My husband had been talking about that almost ever since we moved into the house. There’s a little area that used to be part of the attic that would be perfect. We even had a skylight put in and a bathroom fan installed in anticipation. But that was years ago.

The quote for the second bathroom was a bit rich for us, so we decided to get the plumbing roughed in and maybe over time we’ll finish it off. Or not.

A couple of weeks ago, it all began. The first day wasn’t too bad, mostly just the plumber figuring out how he was going to do everything. The second day, all hell broke loose. There were two plumbers, and two bathroom techs running around, up and down the stairs, doing the demo on the tub and sink, and I had 13 students coming and going throughout the day. Drills were squealing, hammers pounding (and never in time with the song the students and I were playing!), and of course, there was no running water and no functioning toilet.

My nightmare is always the thought of having no bathroom. I’ve almost always worked at home and if for any reason the water is turned off or the toilet not functioning, I’m pretty much out of luck. My husband goes off to work and everything is normal for him, and I’m left at home, needing to pee. All day.

I swear it’s psychological too. Like when you can’t have something, you really want it. When you know you haven’t got access to a bathroom, that’s when you really have to go. I walked all the way across the Brooklyn Bridge once, needing to pee the whole way. I couldn’t enjoy the experience because getting to a bathroom was my one and only obsession. The Brooklyn Bridge for pete’s sake!

And when, as a woman, you come to a certain age, well, it gets even more critical. And it’s unbelievably irritating when your husband is always checking on that. “You sure you don’t need to pee first?” “When was the last time you peed?” “Use the bathroom now, because it’s going to be awhile.”

I so utterly resent that.

There were a couple of times over the first week where I snuck in when I knew the toilet WAS working and the guys were off doing something else. Other than that, I would either walk (or drive, if I was desperate) to the public washroom by the tennis courts a few blocks away from here. That goodness for that!

One of my students offered to let me borrow their porta-potty. I almost took her up on that. And then, I thought, with some trepidation, if I got really desperate there’s always the kitty litter box. Um, okay, no.

In the end, I managed okay. Just a little suffering for a good cause…a new bathroom. It took about two weeks in total, replacing the tub, sink and flooring, re-plastering and re-painting. Before and after pics below :-). 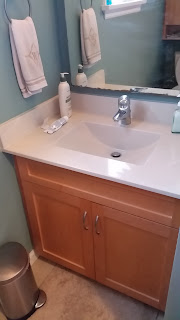 We basically just replaced the basin of the sink, kept the existing cupboards and even the tap, which was fairly new.