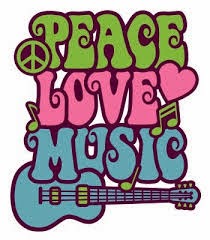 I have to say that I can’t possibly remember the last time I was in a bar at 2pm on a Saturday afternoon, because maybe I never have been.  But that’s where I found myself yesterday, waiting to watch an old student of mine get up with his band to play a set at an open mic.   It wasn’t the kind of “open mic” I’m used to, with a single stool and maybe one mic, if even that.  No this was a huge stage with tons of amps and mics and stands and even lights.

What was interesting to me wasn’t that I was in a bar at 2pm on a Saturday, but that the place was filled with long-haired hippy freaks, dressed as if they never left the 70’s.  You know the type; hollow-cheeked, glassy-eyed, peace sign tattoos, a beer in one hand and a cigarette in the other. Well, admittedly, they were much older, just like me, and some of the long hair was thinning and grey and the tattoos were getting wrinkled. But other than the obvious signs of age, it was like being in a time capsule.  The bands were playing Lynard Skynard, Fleetwood Mac, Rolling Stones and Eric Clapton and the girls (well, “girls” no longer) were up dancing by themselves or with each other as if they were tripping out on Janis Joplin.

If you think I’m just going to reminisce about the 70’s, though, you’re wrong. Actually, I wanted to talk about doctors. Yeah, kind of a leap, I know. But bare with me.

When I was sitting there looking at my contemporaries, I was wondering how on earth this generation, my generation, is going to handle REAL old age.  Maybe it’s because I’ve lost my father and stepmother recently that I’ve begun to think that way.  I’m next.  We’re next.  We aren’t kids any more.  When we were younger, unless we had health issues, we never thought much about doctors.

I didn’t really go to my doctor much even in my 30’s or 40’s, unless it was for one of my kids.  I remember once bumping into my doctor down town and she pestered me about coming in for a check up. But I didn’t really feel like I needed to;  I was healthy and happy and what’s the point?  When I turned 50, however, I thought I should at least make one visit with her and check things out.  Of course, the high blood pressure that had been lurking for years had now reached (literally) a fever pitch, 174 over 93.  Not good.  After a battery of tests to figure out if there was an underlying cause, I was immediately put on blood pressure medication.

I was in shock.  Me?  Pills?  At first I sort of resented the whole notion, but as time went by I got used to the morning ritual of popping a pill at breakfast and making sure I had them with me whenever I went away.  Then late last year, I discovered that I have something called atrial flutter, where one of my heart’s chambers occasionally spazzes out and causes my entire heart to beat too quickly for long periods.  Its likely cause, the cardiologist said, was too many years with unchecked high blood pressure.  Duh.  High stress and things like caffeine can trigger it.  I’m happy to say I haven’t had any bouts for months, but it has to be monitored.

But now my doctor has reached her retirement age…passed it, really.  And although she hasn’t announced her retirement, she has been looking for a replacement.  The problem is, there aren’t any.  Young doctors these days prefer to specialize or to work in clinics with other doctors where they don’t have to deal with overhead and the responsibility of an office and staff all alone.  So GPs are becoming a thing of the past.  And that scares me just a little.  When my sister-in-law had a stroke a few years back, she didn’t have a doctor to oversee her recovery.  The list of potential GPs that was given to her was full of doctors who had either retired or weren’t taking new patients because they were already overwhelmed.  It’s awful to think that you could have a serious illness or injury and no one to keep an eye on you.

When I make an appointment with my doctor these days, it now takes up to a month to get in. She has pared down her hours because she just doesn’t want to work as much these days, and who can blame her? She should be basking in the sun, playing with her grandchildren or spending her days in the garden. If I have an emergency I have to go to a clinic or to the emergency ward, and deal with people who don’t know me. That’s the beauty of having a long term GP, they KNOW you. There is great comfort in talking over health issues with someone who is aware of your history.

I had an appointment with my doctor just the other day, mostly to fill prescriptions. But I asked her a couple of questions too, and we went over my history and the things that had happened. I felt very much at peace after that appointment, knowing that I had a course of action to take and that I could trust the person who was giving me that course. We all need that. Trust and comfort.

As I age, along with all of those hippies in the bar at 2pm on a Saturday, who is going to look after us? For the moment, we can still play, we can still dance, we can act like kids when we hear the music we remember from our youth. Most of us are in relatively good health and, fingers crossed, we will remain so for some time yet. I’m just hoping there will be enough young doctors out there willing to help us out when we will truly be needing it.

As my husband and I walked out of the bar, there was the inevitable sweet smell of pot wafting around us. Someone was giggling. I couldn’t help but giggle myself.

If I closed my eyes, it was like we were just leaving a high school dance. Except it was, by this time, only 4pm.  Still time to get home, eat dinner, watch the hockey game and get to bed early.  The 70’s are, clearly, long gone.