When I was about 11 or 12 years old, I got a tape recorder from my parents.  It was a cassette recorder with a little flip up plastic top and an external mic, something similar to this: I loved that thing…I even took it to bed with me the first night and recorded myself until I fell asleep!  I don’t know why my parents bought it for me or even what the occasion was, but it was the beginning of a whole new world.  I got another tape recorder when I was 15, and eventually I moved up to a reel-to-reel 8 track, then a 24-track, and now I have a digital studio where I’ve recorded many projects.  I wonder if I would have had the ambition or drive to get into recording if it wasn’t for that first little tape deck.

I have a couple of old cassettes from the first years with my tape deck that I never got rid of.  My daughters discovered them when they were in elementary school, and loved being able to hear their mother talking at the same age they were and fooling around, recording my friends and my songs.  And my parents.

Recently, I realized that with both my parents now gone, it might be a good idea to preserve those tapes, so as part of my “staycation” I decided that it would be one of my projects.  Preserving memories in various ways are the kind of  tasks we often have at the back of our minds, only rarely making the time to actually get them done.  So I happily pulled them out (thank goodness I knew where they were!) and set about recording them in digital format on my computer.

First I had to locate a tape deck.  Who has those anymore?  I knew that there was one around somewhere and it took me a half-hour digging around in the basement, but I finally found it.  I hooked everything up and put the tape in and excitedly hit the “play” button.  Nope.  The cassette was so old (45 years or so?) that it wouldn’t roll properly and I nearly ruined the thing trying to make it play.  I tried again and again, and finally, the tiny tape got all tangled onto a little reel inside the deck and it took me another half-hour just to unravel it.  It was a mess.  I was beginning to wonder if I should perhaps find someone else more experienced to do the task, so I went online and started Googling ‘cassette tape restoration’ and any other query I could think of.

Finally I found a messageboard where someone had suggested that you could transfer the tape itself from one cassette casing to another.  Maybe it was the casing that was the issue and not the actual tape.  I had a few newer cassettes around, so I took the old cassette apart first: 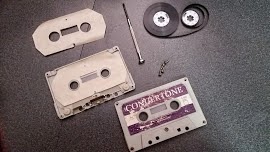 Then I took apart the newer one and painstakingly tried to put the older tape inside of the newer case. 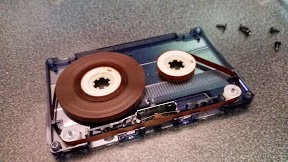 Stupidly, I didn’t check first to see how the tape fit in properly, so I took apart yet ANOTHER case, just to see that.  Eventually, I got the old tape into the new casing and screwed it all together.  I took a deep breath, put it in the cassette deck and hit play. 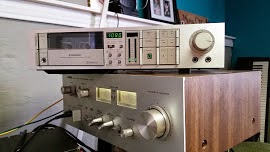 It still took a few rolls, stops and starts before the old tape began to roll more smoothly.  And then I had the delight of listening to myself, my parents, my Aunt May when she came to visit us from Denmark, my friends, and even my little budgie Blueboy chirping away in the background.  I laughed, I cringed, I reminisced.

When I got to the end of the tape, it promptly broke, and in order to listen to the other side, I had to spice it back together with scotch tape. I flipped it over and held my breath again.  Phew…it worked.

I have video of my Dad because he lived a lot longer than my mother who died before video cameras were invented, so all I have are old pictures of her.  And now I have her voice.  At one point, the three of us and my friend sing a Danish lullaby.  My mother decides to do a high harmony and she is beautifully pitch perfect.  What a wonderful thing to have in my possession and to pass on to my daughters;  the sound of my mother’s, their grandmother’s voice.