It surprises me sometimes what I will discover or uncover while I’m out for a simple half-hour walk. Sometimes I experience little moments that surprise or entertain me.  More often than not, I come across objects about which I don’t really know the whole story, so I’m left to ponder.
Things found on the side of the road are common.  On just one such walk last week, I found a toddler’s bright white sock on the side-walk, a child’s toque stuck on a fence post, and finally, thrown across the back of a bench at a bus stop, a pair of man’s pants.  It wasn’t too hard to imagine how the sock and the toque got left behind, but the man’s pants?  As the expression goes, some things are left best to the imagination.
Lately we have enjoyed an extra stretch of sunny days, spotlighting all of the gorgeous fall colours. And the pumpkins!  So many houses have pumpkins proudly displayed on their front porches and fences, some of them carved, some simply left in their bright orange original state.  Halloween decorations are everywhere too, some of them store bought and others home made and entertainingly original.  On one front lawn, there are nothing but graveyard headstones with obvious names of historical figures.  Except one, which is marked “Usher”.  Not a fan of his music? 🙂
Yesterday on my walk, I was crossing a quiet intersection, passing a little girl on her tricycle accompanied by her mother who was carrying an infant in a snugly.  The little girl asked “The cat is just a decoration, right Mummy?” to which the mother reassuringly replied “Yes, sweetie, it’s just a decoration.”  I realized that they were looking at something behind me.  I wondered why she’d be scared of a cat decoration until I turned around and saw the giant blow-up black cat, menacingly perched on the roof of a house.  No wonder she was scared!
Today, heard a cyclist coming up behind me as I was walking…when she passed by me, I noticed she was wearing butterfly wings that flapped in the wind.  Probably on her way to school, to a special school Halloween party, I surmised.

Soon after, I passed a house where someone had posted a piece of paper with a warning to dog owners.  I have seen that post for a few weeks now, and I often see posts like it, telling people to pick up after their dogs.  There are a lot of dog walkers in our neighbourhood, and most of them are kind enough to scoop the poop, but there are those rare few who have no such sense of decency.  I didn’t read that particular post previously because I was sure it was another exasperated home owner who had hit one too many piles of poop while mowing the lawn.  Today, I decided to stop and actually read it. 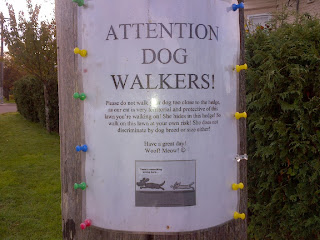 The text below the title may be hard to see.  It says:  “Please do not walk your dog too close to the hedge, as our cat is very territorial and protective of this lawn you’re walking on!  She hides in this hedge!  So walk on this lawn at your own risk! She does not discriminate by dog breed or size either!  Have a great day!  Woof! Meow! :-)”
Below is a cartoon with a cat chasing a dog, who is exclaiming “There’s something wrong here…”
Having had several “territorial” cats, I can well understand the warning!  The picture in my head of that cat chasing dog after surprised dog made me laugh out loud.
Quite often people intentionally leave things on their boulevards that they are hoping to get rid of.  I’ve done that myself a couple of times with varying degrees of success.  But I’ve never understood the couch thing.  Why do people leave stinky old couches out, some of them for days IN THE RAIN?  How can they even imagine that someone would want to sit in something like that, let alone bring it home?  It defies logic.

Lastly, on one of my walks a couple of weeks ago I noticed something white on the ground.  On closer inspection, I saw that it was a note.  I walked past it, and then decided to turn around, pick it up and actually read it.  What it said surprised and delighted me: 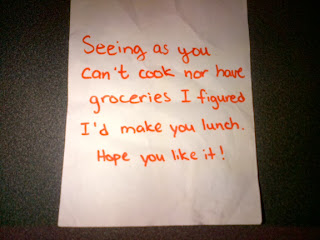 I could only imagine the story behind that note.  There are no names anywhere on it.  Were they neighbours, family, or friends?  Why couldn’t the recipient cook?  Perhaps it was an elderly person or someone just home from the hospital, or otherwise incapacitated.  What struck me most, however, was the generosity of the person who wrote the note.  Somebody knew the recipient’s situation and went out of their way to make them a meal.  This wasn’t really what you would call a “random” act of kindness, rather it was a thoughtful and deliberate one. And it doesn’t get any kinder than that.

I still have the note and I think I will keep it to remind myself of all of the special moments that take place–the extraordinary events that quietly happen between people.  These moments may never make the local news or YouTube, but I am made aware that they are happening all of the time.

Whoever said walks are boring must be doing it with a bag over their head.