I’m sure many of you reading this have been to Las Vegas, and maybe even more than once.  I discovered before and after our trip that many people think of Vegas as a perfect little getaway with all kinds of things to do and see.

And it is.  But when my brother said “Once was enough for me.”, I kind of wondered what he meant.  My husband and I had never been there, and since we had missed our trip to Hawaii this past winter, he decided that we should do something different and a quick trip to sin city was planned.

The landing at McCarran International Airport wasn’t quite as turbulent as some of my friends had described, so I was happy.  Since the knife incident earlier at Victoria International, you can imagine why I’d be worried about what kind of trip this was going to be.  We disembarked and headed to the long line of people waiting for taxis to the Vegas strip.  In that line was a client of my husband’s, who described what we should see and do during our visit.  In fact, I noticed that pretty much anyone I spoke with before the trip had all kinds of advice for us.  Not just advice, but enthusiastic, over-the-top, almost giddy, advice.

It was late morning when the taxi driver dropped us off at our hotel, The Flamingo.  As we entered, I immediately noticed a smell which was kind of perfumed and smoke-laced at the same time.  Over the next few days, I noticed that many of the hotels had similar smells.

We got into our room earlier by upgrading, of course, which was the first hint that the “cheap” getaway might not be so cheap.  The 20th floor hotel room was recently updated, and yet it was a throw back to the 60’s version of Vegas with an old-fashioned chaise lounge, a box of mirrored lights over the king-size bed and a switch that opened the curtains and sheers, exposing us to Bally’s, a hotel across the street, and a great view of the water show at the Bellagio, kitty corner to our hotel.  We sat on the chaise lounge and stared out in wonder.  Wow.

Our first venture out onto the strip reminded us a little of our first exposure to New York City;  a kind of in-your-face senses overkill.  In the streets, alcohol and cigarettes, beggars and sex show pitchers mingled with music blasting from speakers and noisy traffic congestion.  We hung on to each other and chose to start walking to the south.

The super-sized hotels appear deceptively close.  It isn’t until you try to get to one that you realize it’s going to take longer than you thought.  I swear that a two minute crossing of the street turned out to be more like twenty minutes.  I’m still not sure why.  Maybe it’s the escalators and overpasses you have to manoeuvre (you rarely actually cross Las Vegas Boulevard), and the crowds and street people all trying to do the same that conspire to make it such a trek.  And then there’s the size of the hotel properties.  On our second day we walked for 6 hours and only covered maybe a third of the strip.

You can’t just walk by a hotel, you have to walk into it.  Then you have to walk through two or three city block’s-worth of casino before you get to the mall.  Every hotel has a mall.  Not just a little stretch of stores either.  They are theme-based, sometimes multi-level malls with dozens and dozens of stores and restaurants.  The Venetian has a canal running from outside street level to the inside mall, complete with gondolas and opera-singing gondoliers offering rides from one end to the other.  That’s just one hotel.

We were somewhat stunned at the excess.  The volume.  The extreme.

On our first night we bought tickets to see Penn and Teller.  I am embarrassed to admit that I watch Celebrity Apprentice (for the record, I detest Donald Trump), and Penn was one of the finalists this year which prompted us to go and see their show.  If you don’t know them, they are magicians, but that really does not describe them.  They reveal their secrets, they almost laugh at their own industry, and then they dazzle you with unparalleled trickery.   It was a fabulous show.  Afterwards my husband had to prod me to stay so that we could get our picture taken with Penn…I was exhausted from the 3am rise, the knife incident, the flight and the venture so far.  But I gave in and we got our picture: 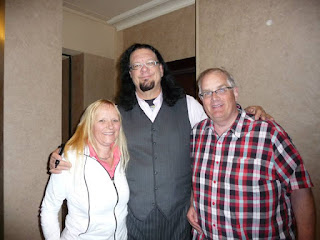 We also went to an unbelievable performance by Cirque du Soleil called “Love”, which is based around the Beatles’ music and their story.  Absolutely amazing, and a show I would highly, highly recommend.

By the fourth day, we had had enough of the excess, so we rented a car and drove along the strip to the outskirts, where we came upon the Neon Graveyard.  This little non-profit organization has taken it upon themselves to recover the old neon signs that originally graced many of the hotels on the strip.  The hotels don’t actually own these signs, they are leased from and maintained by a company until they become too old or outdated to be of any use.  The Neon Graveyard takes them and keeps them on a city lot, where they preserve them and give tours.  They are in the middle of installing electrical outlets throughout the lot so that the signs can be lit up for night tours.  That will be really cool!  I would certainly recommend taking the tour if you are at all interested in the history of Vegas.  We learned a lot and the tour guide was excellent.

We also found our way (eventually, and after some heated debate, but that’s for another story) to Red Rock Canyon, a national park that consists of a thirteen mile drive and a number of hiking trails all through the colourful rocks.  It was spectacular, and reminded me that what I love about travelling has more to do with the “flora and fauna” as they say, than anything else.  We were in a desert and this was an opportunity to pay some attention to that for a few hours.  We also ended up at a couple of ranches, saw some “wild” donkeys, and I actually saw a roadrunner running across the highway which prompted us to sing that old cartoon theme song “Roadrunner!  The coyote is after you!  Roadrunner!  If he catches you, you’re through!”

Aside from the previously alluded to heated debate, that was a wonderful day.  And it was also the last full day of our tour of Sin City, so it was a nice way to end it.

And what did I learn in Vegas?

I’m sure there’s more.  But that’s enough Vegas for me.
IJ