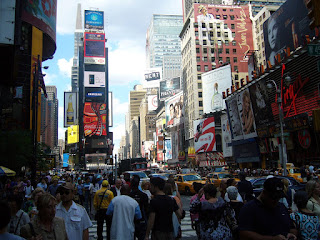 For some reason this article that I wrote in June 2008, never got published on my blog…so here it is:


All last week, I was in a place I’m not sure I ever believed I’d visit; New York City. The first walk from the depths of the hot, dank, underground train station up the stairs into the smells and the crowds and the noise of the street was something I’ll never forget. People, people, people…pushing, cars honking, sirens wailing, heat, smoke from the street vendors selling all kinds of greasy food. Immediately, you feel like you have to hurry…the sweat is pouring from you, you can’t hear each other speak, you keep smashing your suitcase into things, trying to negotiate it around a swarm of human bodies, all rushing off somewhere else. Nobody really gets out of your way…you get out of theirs. You don’t know where the heck you are, you’re trying to get perspective, trying to keep yourself from having an anxiety attack. Then there is the great relief of finding a cab, finally seeing a way out of the madness…you sputter the address of the hotel and, sighing, you sit back in the cool leather seats of the cab and watch a whole different world whiz by you. Cabs have TV’s in them. And GPS video image maps so you can watch yourself getting to where you’re going. How strange is that?
From that moment on, it was a whirlwind of activity…we were overwhelmed. New York is almost a world unto itself. You know it’s big because you can’t see a way out of it! Every street you look down is just a cascade of tall buildings, one after the next. You don’t really get any geographic perspective; all of the buildings are so tall that you can’t identify your landmarks even if you’re only a block away from them! It wasn’t until the last day that I figured out which way to go when I walked out the front door of the hotel.
Now I’ve lived in a city, the city of Vancouver in the West End in the late 70’s and early 80’s, and I remember the feel of it, the pace, the constant rush of white noise. So I’m not exactly a country bumpkin. But it’s been awhile, and even though I anticipated what it was going to feel like, I was still thrown for a loop. We all were.
Yellow cabs. There are over 12,000 yellow cabs in Manhattan alone. And they are always honking…honest to Pete I don’t know how there aren’t ten times more accidents than there are. The cabs are always chasing each other, twisting and turning, squeezing in between and then squeezing some more. And honking some more. They honk at each other and at everybody else if they can’t get their way. Fists come flying out windows, obscenities belch through the air, out into the streets where a person like me stands on the corner trying to figure out where the heck I am. Too late…the crowds push behind me and I have to cross the street. Damn.
Pedestrians. They don’t wait for walk signs here. They wait for the last yellow cab to peel through and then casually cross behind them, cellphones glued to their ears, oblivious of that little red hand flashing across from them. Usually by the time the walk sign comes on, there are three or four trucks jammed in the intersection. But the locals brazenly swarm off the corner in groups, either rushing between vehicles or their heads peering back and forth looking for the first hole. Then bam! A car couldn’t make it through the horde of human bodies if it barreled them all down. The sheer volume of pedestrians, especially near places like Times Square, is unbelievable.
Times Square. That’s the picture you see above. It was the first recognizable landmark we came across the first night we ventured out. We were fish out of water, just meandering aimlessly looking for food, when suddenly the whole world lit up and started buzzing and flashing. There’s a law in the city that in Times Square a majority of the percentage of the buildings’ face must have advertising. One building owner doesn’t even have tenants anymore. He makes $300,000.00 a month just from the advertisements on his building! There are giant M&M characters climbing the Empire State building on a 30 foot high screen. I saw a 20 foot high bottle of Corona, my favourite beer! Nike, Pepsi, DKNY, Broadway theatre advertisements, movies, television stars. Macy’s Department Store, Rockerfeller Centre.
What an assault on the senses!
And would you believe it, it so happened that the Tony’s were being broadcast live from Radio City Music Hall, just as we were mosying on by. Whoopi Goldberg was in there, and the limos and black Cadillacs were lined up and down every street, parked and waiting for their consorts.
Okay. That was just the first night. There is so much to tell that I’m going to have to do this in bits and pieces. But I will certainly have more to say.
“New York, New York, it’s a wonderful town
The Bronx is up and the Battery’s down”
Now I finally know what that means!
IJ