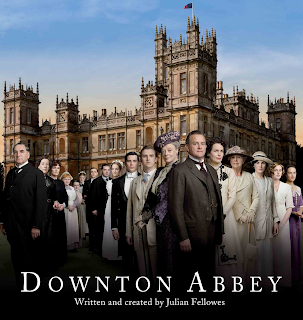 My family has always laughed at my rule of never watching a movie more than once.  I have been the same with books;  my thought has always been “I’ve already read (seen) that, why would I read (watch) it again?”

In the last couple of years, however, I’ve realized how much I miss when I only give something one run through.  You can’t possibly take it all in without a revisit or two.  And even more recently, I found myself re-watching episodes of Downton Abbey more out of desperation than anything else, because it has such a short season to begin with.

I discovered Downton last summer when I was bored and wanted to watch something, anything, online.  These days with PVRs so handy, my husband always has piles of movies and series he wants to watch which are rarely my preference.  Like that zombie series.  What is so appealing about strange creatures who want to eat brains?   “The Good Wife” isn’t bad, but ice truckers and stuff pickers and storage bidders are just not that fascinating to me.  Anyway, I don’t want to go into another room by myself and watch another TV, so I stay in the living room and watch whatever I can on my laptop, whether it be documentaries or movies on Netflix or some of my favourite PBS or CBC series that are available from their websites.

So last summer I decided to buy the first episode of the first season of Downton Abbey on iTunes because I was curious after I’d heard so much about it.  And I was hooked.  Hooked, line and sinker.  I ended up buying the whole first season, and then the second.  And then I watched them all again twice.  This past January, I bought a pre-season pass to the third series so they would download on my laptop when they were available.  And much to my surprise, my husband decided he wanted to watch it with me since we so rarely watch things together these days.  Now, I’m not sure he’s hooked like I am, but he watched the whole third season with me when they aired on PBS on Sunday nights.  Then, sometime during the week, I would watch each episode again on my laptop, because I’m just that addicted.  I am so happy that I have the three series on my laptop because I know that sometime within the next few months and before season four, I will once again go through every episode in the three series.  Maybe twice.  I’ve got it bad.

So what is it about Downton?  Well, those who are as addicted as I am, need no explanation.  It’s a soap opera within a period piece.  It’s a cast of contradictory and yet complimentary characters.  It’s a beautiful setting, Hycroft Castle, and the splendidly authentic interior sets and costumes.  It’s the delicious delivery of those classic lines from Violet Crawley, played by the incomparable Maggie Smith.  Each episode has at least two or three tasty ones.

The last episode of the third series aired last Sunday night.  I am already feeling symptoms of withdrawal.

I think TV audiences these days, especially those of us who were raised with one television in the house where the whole family gathered together to watch our favourite weekly shows, are desperate for good quality, well-written episodic television.  I know, I know.  I’m awfully close to blurting out the tired old phrase “the way it used to be” just like my parents did and their parents before them.   And of course, it isn’t easy to dissect why not enough good quality series are not being produced, because there are many reasons.  But I think one major reason for it is the fact that networks keep chasing younger audiences who don’t really care about TV, and in some cases losing those of us who are already habitual TV watchers.  And that’s the end of my rant.

Because if you don’t mind, I think I’ll just throw on another episode of Downton and escape once again…