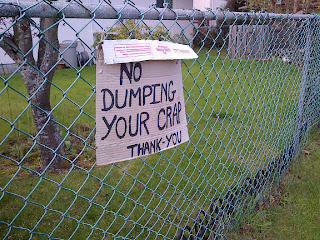 I was out for my daily walk one day last week when I suddenly heard the squeal of car tires.  The street I was walking along has parking on both sides…it’s not a main thorough fair so when you’re driving along it, you have to yield to cars coming in the other direction because parking on both sides of the street make it too narrow for two vehicles.  Most of the time, one or the other driver stops to allow oncoming traffic through.  On this occasion, however, I realized right away that two cars had barrelled toward one another and neither vehicle had wanted to yield.

They were at my back, but I glanced around to see them both stopped.  I continued on, figuring that they would work it out but only took a couple of steps when I suddenly heard someone yelling.  It was a woman’s voice and she was beside herself with rage.  “What the **** do you think you’re doing?  Are you ****ing crazy?  Don’t you know who I am?”  Well, the first two sentences  surprised me a little, but third one REALLY surprised me.  Don’t you know who I am?  I wondered who she could possibly be but I was almost a block away by this time and when I turned to look again I could see neither driver, only their cars, one red Jeep and one gold mini van, still stopped.

I turned back and continued on my way.  She yelled again a couple of times and then I heard tires squealing as one of the vehicles took off.  I turned around to see that it was the red Jeep, but the mini van was still sitting in the same spot, as if frozen.  I half expected it to finally drive off in its respective direction, but to my surprise, it didn’t. The mini van backed up into a driveway, and began to go off in the direction of the Jeep.   I looked past it to the intersection a few blocks away just in time to see the red Jeep signal and turn right.  Now I don’t know what the person in the mini van was thinking, but my guess was that he or she was off to tail the Jeep.  Sure enough, when it got to the intersection, it quickly turned right, in the same direction of the Jeep.

I would have loved to know the end of that story!  Did the mini van catch up to the Jeep?  Was it just to get a license plate number or maybe to cause another confrontation?  Was the irate woman in the Jeep or the mini van?  And just WHO WAS this woman anyway, expecting a stranger to somehow recognize her?

As I walked along further, I realized that this woman’s raging voice and words were still in my head.  I must have gone a half a mile before the voice was finally silenced.   It’s not the first time I’ve been witness to some sort of confrontation on that street;  on another occasion I witnessed a car nearly hit a cyclist.  The driver of the car immediately stopped and got out and apologized;  a rare thing indeed!  But the cyclist, who, by the way, wasn’t wearing a helmet, decided to lambaste the driver, yelling profanities as he stood there.  No matter what the driver said, the cyclist couldn’t be placated.  Finally, the driver had had enough of the cyclists rudeness and yelled “Why aren’t you wearing a helmet?”, got in his car and drove off.

I couldn’t blame him.  On that occasion too, the cyclists’ yelling didn’t leave my ears until I had walked quite a bit further.  Not even with the birds happily chirping and the sun shining through the trees could I let go of what I had heard.  Which leads me to wonder how devastating it must be to a human being who has to endure the rage of another over days or months or even years.  If it took so long to leave me on both of those occasions, I can imagine it never leaves one who is continuously bombarded with it.  Anger, especially self-righteous anger, is poison.  It can even affect a person who is simply within ear shot.

The sign you see in the picture above is one I see every day on my walk.  The first time I noticed it, I knew why the home owner had put it there.  For some reason, people would always throw their garbage on the other side of that chain link fence, into their yard;  things like candy wrappers or empty Starbucks cups.  I’d be mad too if I lived there and constantly had to pick up people’s garbage from my own yard.  The sign has become somewhat of a metaphor for me.

ALMOST enough to want to make a t-shirt with that line on it to wear on my daily walks!