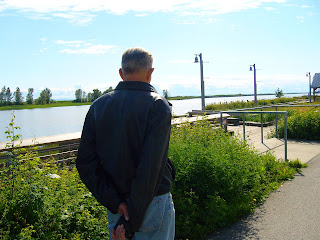 Last fall, I had the ominous task of packing and loading up my Dad’s lifetime collection of books and hauling them back home on the ferry to Victoria. The majority of them were history books, everything from Pierre Bertons’ series on Canadian history to large picture books of World War II and biographies on some of the world’s notorious and historic leaders.

I was able to give some away to my brother-in-law who is a high school history teacher, but the rest I had to contend with myself.

My Dad loved his books. There is a room in the townhouse where my parents moved to in the early 90’s and where my Dad had a whole wall of bookshelves filled with them. He’d spend a lot of time, especially as he got older, going up there and perusing through them, and sometimes I think it was more to remind himself of certain dates and events than anything else. His dementia has slowely robbed him of his ability to remember significant moments in history–something he used to know like the proverbial back of his hand.

And so it was with great regret that I sat in that room and packed away every last book into boxes for the trip back home. It was a sweaty job…books are heavy! Not just physically, either…every one of them seemed to be a little piece of him somehow. A couple of the books were in Danish, and another book or two I put aside because I knew they were special to him. I hauled them down the stairs and into the van and drove them home. Oddly enough, I felt like I was robbing him, but he wasn’t there to see me haul them away, thank goodness. For almost a year now, he has been living in a care facility and has only had a rare trip back home.

When I got back to Victoria, I dragged the boxes into the basement and wondered what I was going to do with them all. Could I sell them? I took a few and looked them up on the internet, but realized they weren’t really worth that much and it would be more bother than it was worth. Could I donate them to the local library? There seemed to be no way to do that.

This weekend, though, I finally had my answer. And so I loaded them all back into the van and drove them a couple of miles from where we live to the Times Colonist Book Drive, a local event put on by the Times Colonist (a Victoria newspaper), to raise money for a program called “Raise A Reader” which furthers education and literacy projects here on Vancouver Island.

For all the time and sweat and heartache it took me to pack them up, it took only two minutes for the volunteers to take them out of the back of the van and into the wearhouse to be organized for the book sale. I stood and talked to one of the volunteers…a part of me wanted to talk about where they came from and what they meant to my Dad. But I really didn’t get the chance, and I doubt very much that anyone cared except me. After all, they’re just books.

Which brings me to the topic of this blog entry; things.

We sure attach a lot of emotional value to things. I once bought a new set of wine glasses because I had been using my late mother’s set and had occasionally been cracking or breaking them. I wanted to save them…but for what and for whom? My daughters don’t really care about my mothers wine glasses, so I’m sure they’d eventually be given away or even thrown out. The only reason those glasses have any meaning is because of something in my head and my heart and my past…and that’s all.

I have three sets of china. One set is from our wedding, the second is my mother’s and the third is my grandmother’s, rescued by my sister when my grandfather passed away and his house and its contents were being dispersed. So I have all of these sets of china, none of which are used very often. But I hang on to them because they mean something. And yet, things become as much a burden over the years as anything else. I worry about them, take care of them, keep them safe, all which takes up time and energy. If I’m not careful, I will have all of these things to burden my children with once I get too old to look after them myself. Not only do I have my things, I have other people’s things because I’ve offered to store them, and I have my children’s things packed away for when they move out or want to come home and take them. Which perhaps they never will.

Last week I went to Vancouver to take my Dad to a doctor’s appointment, and afterwards we drove back to the townhouse where we had a lovely meal. When we had finished eating, I started to clear and clean the dishes, but when I turned to say something to my father, he had disappeared. I knew where he went…upstairs to his room of books. I guess I panicked thinking he’d see that they were all gone, so I tore up the stairs. I was right, there he was in his room. But he seemed not to have noticed how empty it was, he was more interested in grabbing an extra comb from a drawer. “I need another comb,” he said and promptly slipped it in his pocket and walked out of the room.

Did he see that his books were gone? If he did, he certainly didn’t show it. And I tried not to show my relief.

Sometimes I wish I could grab an alms bowl, put on some simple monk robes and walk away from all of these things I have. So much of what I have, I don’t use, and all they do is sit and collect dust. So I have resolved myself that I am going to have a huge garage sale in the spring and try to get rid of everything I don’t use at least once in awhile.

Except my mother’s wine glasses. And the dishes.
Ah, I’m hopeless…

4 thoughts on “The Thing About Things”