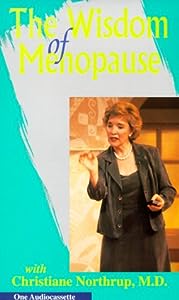 Cover of Wisdom of Menopause

There have been three significant times in my life when I’ve had to go through a transformation of some sort, and not necessarily because I wanted to! The first was when I was 14 and my mother died. The second was when I had my children. And the third is happening now.

The first two changes left me feeling completely alone, but they also lead to a liberation of sorts.

When my mother died from Hodgkin’s disease in 1972, I had no siblings and my father and I were almost strangers, since he had left most of the parenting to my mother. For a burgeoning teenager, facing the idea of death for the first time was terrifying enough, but to lose the one gentle, guiding light in my life was absolutely devastating. When you’re that age, the changes you face physically and emotionally are already overwhelming. Although I got through school okay, I struggled when my father remarried only two years after my mother died, another big change. So I think I did the only thing I could to take charge of my own life; I moved out at the age of 18 and from then on, took care of myself. Big Change Number One.

I lived alone for six or seven years until I eventually moved to another city, Victoria, and married my husband and had my first child, which brought on the second big change. Although I had my husband, who had no trouble adapting to being a father, I really had no one else around me to help me cope through the unbelievable transformation it takes to become a parent for the first time. There were no strong, female forces in my life; the female friends I had who had children were more like acquaintances, and my other good friends didn’t have children of their own. I had a long, drawn out bout of postpartum depression that lasted for months. Sometimes I think it actually lasted until I got pregnant with my second daughter a couple of years later, where my body kind of corrected itself hormonally. Being so alone in the dead of winter with a child for the first time, no siblings to share it with, no mother, not even in-laws because my husband’s parents didn’t live around us either, was very difficult. I felt like I had lost myself.

It’s funny how a female can be so focused on the marriage and kids idea at first. But what happens after that? I loved my kids to pieces, but was not content to just stay at home and be a mom. I had a part-time job, but most of what I made went into paying for daycare, so with the encouragement of my husband, I decided to quit that and get back into my music. At first I played pubs and coffee places and anything else I could find. I finally recorded some of my songs and sold my tapes whenever and wherever I could. And I started teaching guitar. That way I could still be home with my kids while I was teaching during the day, and my husband was home when I was out performing a few nights a month and whatever else I could find. Big Change Number Two.

And now I am at the precipice of Big Change Number Three.

I have been reading Dr. Christiane Northrup’s book “The Wisdom of Menopause” over the last while, having only discovered it after catching a PBS special of her’s by accident a few weeks ago. The book has been out for years, but for some reason it never caught my attention. I think I would have benefited greatly had I found it earlier in my peri-menopausal state, but nevertheless, it finally came to my attention and has already given me great insight into the changes that have been occurring in my life and the ones that are about to come.

So who will I be now?

In some ways, this feels like the most sober, conscious and calming change I am about to face. The last few years have been the tumultuous part, just as my mother’s death and my first child’s birth were for me. I am not sure that I knew I was re-inventing myself the first two times, but I am very conscious of that now.

Buddhist teachings have been my refuge in the past four or five years, and I am not sure I’d be as sane as I am now without them. They have given me a lot of insight into the workings of the mind and of the world, and some practical ways of thinking which have grounded me. They have also taught me about the process of rebirth.  Much of what the last few years have been about is letting go, a subject I have written about in past blogs. What I haven’t realized is how much I have to let go of my old “self”. Buddhism teaches you that there is no perpetual, permanent “you” to begin with, so there’s nothing to cling to anyway. But your ideas about yourself are the hardest to let go of. We like to categorize ourselves, to define our personalities and preferences in clean and tidy ways and that’s that. But sometimes our circumstances and the events in our lives force us to reevaluate: Is this really me? Do I really believe this?

I used to think that the idea of reinventing the self came mostly from those who were bored and restless. Maybe so. You could even say that living at home with my new stepmother made me bored and restless, or being at home with the kids did that. But I think it was a much larger and more powerful driving force, something I can’t really specifically identify; like giving birth, it’s more or less out of your control as the body goes into automatic, baby-making mode. It is, in fact, a rebirth.  You can’t stop it, it’s going to happen anyway so don’t resist!

In the last few weeks I have been able to remind myself of all that I have. And I have a lot. Dr. Northrup’s marriage fell apart as she went through menopause, mine is as strong as it has ever been. Some women need to find their true calling for the first time as they are heading towards menopause, I already found my calling after my children were born. I have no desire to be a rock star now 🙂 Thank goodness! Whatever I become, I will make the transition with my eyes wide open and carrying within me a real sense of peace.

Yesterday I went on my usual 2 kilometer walk. To my surprise and delight, it was almost balmy outside, the birds were happily singing and I could smell every fresh bloom as I passed it. I haven’t felt that happy in a long time.

Whoever the new me is, bring her on!