One day, a few years ago, I was watching the local news on BCTV in Vancouver and they did a story on an AIDS Memorial that was being constructed on Sunset Beach, not very far from where I used to live in the West End in Vancouver. 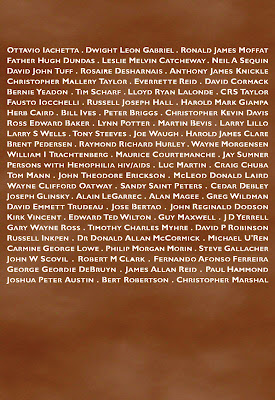 I wouldn’t have paid much attention but for the fact that I used to live in the West End, and remembered how there was a growing gay community there at the time. This was the late 70’s, when homosexuality was only beginning to become a political and social issue. “Coming out” was not as common an expression as it is now. In the apartment block I lived in I knew several gay men, not by name, just in passing.

I worked at the Vancouver Public Library then, on the corner of Burrard and Robson. I was able to walk to work every day, three or four blocks from my apartment on Haro Street. It was a kind of lonely time for me, but I met so many wonderful and influential people at the library, people who literally changed my life. I wish I could tell them that now. And one of the most important things I learned is that libraries are not as dry and boring as you think!

The people I met there introduced me to the arts, fine wine, culture, and exotic cuisine…librarians are a lot wilder than you might imagine :-). It was an eye opening and mind expanding experience at the Vancouver Public Library and I still smile when I think about it.

And I fell in love there. Or in lust, I guess–with the security guard who worked there. He was tall, he wore a uniform and he was Swedish. What more could a person ask for? I lusted after him for four years, doing the stupidest, most juvenile things all in the hopes of getting him to notice me. Hell, I even followed him all the way to San Fransisco…

We talked a lot. I worked in the Sociology Department on the main floor of the old library, and he usually sat on his stool at the front entrance, carefully watching everyone as they checked their books out. I could see him sitting there from my desk and I spent many hours just watching him. Several times a day he would make his rounds on the other floors, ending with a sweep down the stairs of the mezzanine floor, right beside my desk. I waited and watched for that walk down the stairs, every day. Sometimes he would stop just to chat and I was in heaven.

I tried to take my coffee break around the same time he did. I didn’t always time it well, but on the days I did, I brazenly walked over and sat at his table. We chatted about a lot of things…but thinking back now, I suppose he was the one who did most of the talking. He talked about his travels to Australia, Europe, and India. He was about 16 years older than I was and everything about him seemed so mature and interesting and exotic. He talked about the music he liked (I followed him to a Harry Chapin concert once), and the books he liked (I never did get into The Hobbit the way he did, but I bought the books), and astrology and religion. One time, he revealed that he was a Tibetan Buddhist and then began to pull out a necklace from under his shirt…for some reason he had second thoughts about showing it to me and put it back. I just let the incident go because I was too polite to push him. But I was desperate to know everything about him.

I was so insanely in love (or in lust) that I would do the stupidest things…on several occasions I left notes in the pocket of his shirt down in the stacks where I knew he kept his street clothes. One time I convinced him to meet me at a local restaurant after work. I was so anxious to tell him how I felt. It was the most nerve-wracking experience I’d ever had, but I confessed. He told me that he was still holding a torch for a woman who couldn’t marry him because he wasn’t Jewish. I was crushed but it didn’t deter me for long. I was convinced I could get him to love me.

And then there was the time that I followed him to San Fransisco. He liked to go there often…he had good friends living in the city who he would stay with whenever he travelled there. The summer that I turned 21, I had vacation time around about the time that he did and I knew he was going there, so what did I do? I booked a flight to San Fransisco. All by myself. I told him I was going and where I was staying…all in the hopes that he would decide to call me and we would get together and ???

I was there for a week, staying in a motel in Palo Alto, which is quite a distance from San Fransisco as I found out. I would go out and do some kind of excursion every day, and then come back to my motel and check for messages. I never found one. I stayed in the motel at night because I didn’t feel too comfortable about the idea of going out by myself. Only a few months before I was there, a San Fransisco City supervisor, Dan White, shot and killed the mayor and another supervisor who was a gay rights activist. He was convicted of manslaughter rather than murder, and every night, the local news was full of images of riots called the “White Night Riots” in response to his sentence. It was a scary time to be there, but there I was.

I was booked to travel back home via the Amtrak to Vancouver. On that day,  I had to take the bus into San Fransisco to get to the train station, so I decided to go a little early and walk around the city a bit. Then I ran into the strangest event…a gay rights parade. In the late 70’s, San Fransisco was one of the first cities to hold such an event–and it was something I had never experienced before–kind of freaky, colourful, sort of wild and completely shocking to a naive goof like me. I stood at the corner of a street and stared at the outrageous show…at one point, I heard a very deep voice behind me saying “Hi”…I turned around to see a transvestite in sequins on roller skates. He handed me a pamphlet. I’m sure my jaw dropped right to the sidewalk. There were dozens of floats with wild men (women too, but not very many), dancing and gesturing and showing their oiled, tanned bodies in skimpy leather and lace and whatever else they could find to barely wear. Y.M.C.A. I had never seen anything like it. For years after, I held onto a coin that I caught when it was tossed from a float into the street–“Bulldog Massage Parlor”. Wish I still had it. My train trip back was quite an adventure too, but that’s for another story. I got home safe and sound, having never made any contact with the security guard.

Somehow or another he and I lost touch over the next couple of years. He left the library and moved on to other things. And then I left the library to move to Victoria to live with Michael, where I still am, of course.

I got a call one day from an old acquaintance from the library…she was trying to find me because of someone else who was looking for me. And then she told me that she had heard that the security guard had passed away.

Well, I was sad of course, but so many years had passed. I was happily married with my two little girls, and Ted seemed like a long time ago. Ted..that’s what I called him. But his real name was John Theodore Erickson. And that’s what I saw on that news story, a number of years later. I was watching as they told the story of the Aids Memorial being built in Vancouver. They showed footage of one of the first panels to be erected. And right in the middle of the frame, I saw his name.

I’m sure I did a double and a triple take. It was as if it jumped right off the screen, like a message from somewhere, telling me something. And then it was gone. My heart leaped. And then I started to put the pieces together. Ted was gay. And he died of AIDS. How dumb can a blonde be?

Lately, I’ve been listening to Steely Dan, to a song that I think I was listening to around the time that I had my mad crush on him. And I Googled him…and found the memorial, which is how I came across the photo I’ve attached above. If you look at it again, right about in the centre of the list, you’ll see his name.

I heard once that almost everyone in their lifetime will be touched by someone who has AIDS. I guess I’m now one of those.