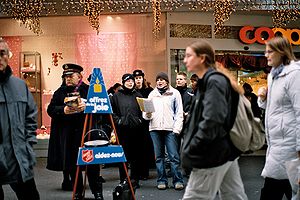 One of my favourite events of the year is the annual Christmas Drive-Thru that CHEK Television and a number of local sponsors put on every year to raise money and donate clothes and toys and food to the Salvation Army.

The last two years it’s been a live broadcast from a local hotel during the news hour. Instead of commercials, the news cuts to the hotel, where CHEK staff and other volunteers happily unload all kinds of donations from people’s cars, while the Salvation Army band plays Christmas carols. My job has been the same over the past 16 years or so; I direct traffic.

I love directing traffic. I’m usually not where the real hubbub is, I’m out of the shot of the cameras and the “celebrity” staff and the unloading. But I get to see the look on driver’s faces as they are approaching the main event. I direct them with a happy smile and wave them through, and they usually have big grins on their faces, looking forward to giving their donations and maybe catching the eye of one of our better known on-air personalities.

Sometimes they look a little confused because they are not sure which way to drive through, so I make sure they know where they are going. There have been a few incidences over the years when people did some pretty wacky turns or ended up on a curb in their confusion. Sometimes as they are approaching from a block or so away they start to slow down, so I enthusiastically wave them over until I see them speed up, a little more confident that they’ve come to the right place.

I try to catch them on the way out too, and thank them and wish them Merry Christmas. It’s the best job ever, and even when it’s cold or wet or miserable out, I wouldn’t miss it for the world.

So the other day when I went to my father’s care facility to spend the annual Christmas luncheon with him, I understood the grins on the volunteers faces as they worked tirelessly to feed everyone and sing songs and make merry. It was a huge job, even with an army of volunteers. Not only did they serve regular meals to everyone, but they served special meals to those who had special diets. The staff delivered the medications to all of those who needed it, and a lady sat on the piano and played Christmas carols, while a volunteer Santa visited and had his picture taken with every guest. We shared a table with a brother and sister who must have been in their 70’s or 80’s, whose 103-year-old mother was also there. She was deaf and in a wheelchair, but you could tell by the twinkle in her eye that she was definitely with it!

This is the time of year when the best comes out in a lot of people. I know, I know, the worst comes out in others, but I’m going to do my best to ignore that part of the season. Instead I want to focus all of my attention on the people who do so much for others this time of year, whether it’s volunteering at a care facility, or standing in the cold ringing a bell and taking donations. I’m going to contribute by patiently letting the driver in my lane, even if he didn’t signal first, or opening the door for someone who’s got an armful of packages.

Let’s face it, Christmas is a difficult time for a lot of people. Maybe in some way, it is for you. So if you’re feeling the need, do something for yourself by doing something, no matter how small, for somebody else.

And have yourself a Merry Little Christmas 🙂
IJ