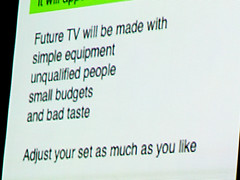 Undoubtedly, you have heard all about the “balloon boy” incident by now, where a home-made experimental weather balloon was set adrift supposedly carrying a 6-year-old boy for 80 kilometers as the helicopters and media aircraft followed it, broadcasting live, of course.

People began to suspect that it might be a hoax when Wolf Blitzer of CNN asked the boy a question in an interview with the family, and the boy responded that it was all “for the show”.

And now it has been confirmed that the whole incident was indeed a hoax, and that the family had devised the plan, hoping to get a reality TV series out of it.

Is this what family television has come to?

I could sit here, as I suppose many of you could, and sound off about poor parenting and setting a horrible example for the kids. The fact is that this couple could potentially lose their children because of their idiocy. And maybe they deserve that. But what is even more significant, I think, is what it really reflects about the insanity that been created around reality shows. I’ve mouthed off about reality shows before; who can forget the Jon and Kate Plus 8 mess that ended up with the show being canceled, lawsuits pending, and a nasty divorce in the works? Again, the kids are the ones who are really suffering. And to put your six-year-old boy up to a nation-wide hoax JUST so you can get a reality TV series is almost incomprehensible to me. And desperately stupid.

People have become certifiably nuts about media and fame and money, and in the U.S. this insanity seems even more exaggerated.

YouTube is also contributing to this hysterical drive for attention. People do absolutely outrageous things in order to create a video that may potentially “go viral”. Some of these videos involve hurting people or animals or destroying property; there are beatings, fights, people let their small children drive a vehicle, for pete’s sake. And then they are stupid enough to post these videos on YouTube; do they not realize that the authorities can figure out quite easily who they are and arrest them?

The desire for money and attention has truly become a sickness for so many people. And our kids are growing up with this stuff all around them, so they are almost becoming desensitized to it. It has gone far beyond posting a video of your cat chasing the light from a flashlight, or your little girl learning to ride a bike for the first time.

And where will it go from here? I think the people at YouTube are going to have to start taking more responsibility for what they are, in fact, encouraging. But who is going to hold them accountable? My guess is that majority of the staffers at YouTube are in their 20’s or 30’s. They have not lived long enough to understand long term consequences of anything.

Okay, I’m off the soapbox. I’m not anti-YouTube, I hang out there a lot, but obviously not to watch those kinds of videos. I’m not anti-youth, but I think a lot of them need a kick in the pants. I’m certainly not anti-television, I am in fact a co-owner of a local station. But I’m thinking that the executives at these big media and internet companies are the ones who should be scrutinized. They are only seeing $$, and they should know better. Somebody up there in that fancy office 93 stories above street level should be saying “Hey, wait a minute…”.

I ain’t holding my breath.