We’re having a bunch of friends over this Saturday for a barbecue.  Not a big deal, and certainly not something I’d report here necessarily except for the date.  When I announced the date, one of my daughters asked if it was such a good idea to have a barbecue on Sept.11th.  It’s certainly not that I am insensitive to that date being synonymous with such a horrible event, but sometimes I wish it had another name.  You know, like D-Day had a name.

But I guess we’re kind of stuck with it, and Sept.11th or 9/11 will likely never just become an ordinary date in the foreseeable future.  So it shouldn’t have come as a shock for us to hear that nutcase pastor Terry Jones is planning a burning of the Qur’an on Saturday…my first thought was that maybe someone should burn a few bibles on his lawn.  But that would be exactly the opposite of what really needs to be done.  He should be given no attention whatsoever.  He is simply ignorant.  Ignorance is more dangerous than hate;  if we weren’t so stupid, we wouldn’t hate at all.  If only we would take a moment to learn the facts and the truth;  Muslims didn’t take down those towers, some misdirected, uninformed and ignorant people did.  And that’s what Terry Jones and the 9/11 hijackers have in common.

I’m kidding myself.  The media (and remember, I am also indirectly a part of the media) loves this kind of stuff.  And the wackier, the better.  But you think that giving Terry Jones publicity is bad?  Here’s another example of using that date as a way to get some attention.  Only this time, it’s to sell a product.  And it’s from France (Americans will just love that fact): 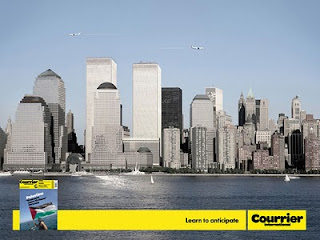 Can you believe it?  This courier company is promoting the idea of learning to “anticipate”, by building the twin towers shorter so the planes won’t hit them.  Not only is it not funny, it’s shocking.  This idea of tastelessly using real disastrous events like 9/11 to sell products has been branded “adploitation”.  And, I’m sad to say, it’s not the first ad agency using that date and/or exploiting those images.  Believe it or not the WWF was also presented with an ad by an agency in Brazil using manipulated 9/11-like images.  It was rejected, but the word got out and the WWF had to explain themselves.  The Moscow News had one too and it actually got past the approval process and into the public.

So there you are, the two extremes:  over-sensitive and not sensitive enough.  I hope in the next few years September 11th will become less of a target for adploitations and, at the same, not such a holy date that we can’t plan barbecues.  But I’m not holding my breath.  That date is just never going to be the same.