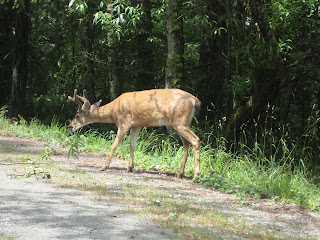 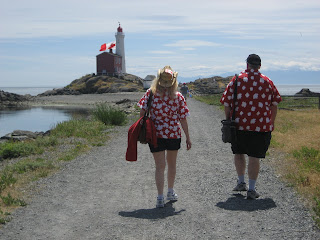 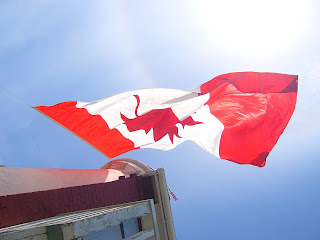 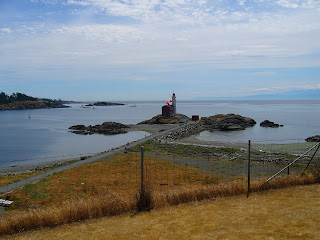 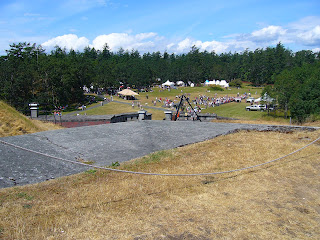 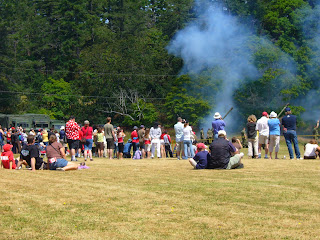 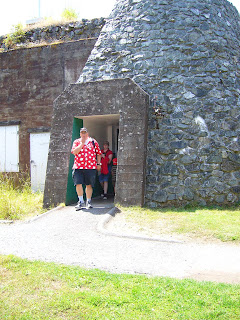 These images are from today, July 1st, 2007. Gracie and Michael and I spent some time at Fort Rodd Hill, which was an actual fort built in the late 1890’s to protect and defend Victoria and the Esquimalt Naval Base. It’s one of many national historic sites across the country, and every Canada Day there is a big celebration there with a military band, 21 gun salute, a huge birthday cake and lots of festivities.

Gracie and Michael and I wandered around the fort after the ceremonies, and Gracie and I took a few pictures. Gracie made those shirts that Michael and I are wearing, a few years back when she was taking Textiles 12 at Vic High. We wear them every year and always get lots of compliments. One year a lady came up to us and offered Gracie money if she would make her one!

The giant flag you see is actually attached to the lighthouse out in the harbour…I thought it was a cool shot 🙂 In another shot you can see the lighthouse which is actually on a very small island called Fisgard Island. The walkway was built out the lighthouse and you can go inside and tour around it.

You’ll also see a shot of the crowds taken from on top of the gunnary. In one shot, if you look carefully, you can see a big puff of smoke and Michael and Gracie plugging their ears as the 21 gun salute begins. I swear I didn’t plug my ears once 🙂 I’m not skeerd! You can also see Michael and Gracie exiting one of the many gun batteries and underground magazines that visitors can view at the Fort.

It was a nice, mild day, not too hot and not too crowded this year. Finally as we were driving away from the Fort, we spotted this beautiful deer on the side of the rode. I grabbed my camera, but I’m a goof and had it on another setting, so Gracie got a lovely shot. Oh, Canada!