I just finished chasing her around the house for the umpteenth time today…she had a stinky butt and I was trying to clean it before she wiped herself on the floor yet again.  For the most part, she is pretty well trained and clean, though, and this was a more unusual incident.  She is the cutest thing, and an absolute terror.  In fact, right now she’s ripping up my legs trying to jump up on the chair where I’m sitting.

I’m talking about our new addition to the family, Moe.  She was supposed to be a “he”, an unusual thing for a calico cat.  Turned out she wasn’t all that unusual.  She and her three siblings were left in a cardboard box by a bus stop somewhere in Vancouver back in April.  A fellow saw the box was moving and opened it up to find them, barely four or five weeks old, squirming around each other.  He knew of someone who adopted cats here in Victoria and called her up.  Monica, who already has a menagerie of animals…cats, dogs, tarantulas (yes, tarantulas) and even more…was ready and willing to take them in and find them new homes through a cat rescue organization that she belongs to. My daughter Dana had been telling her friends that we were looking for a new cat, and one of them had heard about Monica and the box of kittens, so Dana got in touch with her.  And that is how it all began.

Since we lost our good ol’ cat Picard last year, I knew I’d eventually get another one.  I wanted a kitten as opposed to a grown cat for all of the obvious reasons;  they’re cute, they’re funny and they’re cute.  Did I say they’re cute?  But I have to admit, I had forgotten how crazy they can be!  Moe does all the cute kitten things, but when she is wide awake, she’s like a whirling fuzz ball on crack.  We call her “psycatic”.  I know Picard was like that once, but by the time he passed away he was as mellow as mellow can be.

We’ve had her for over a month now and she has grown tremendously, although I don’t think she will be a large cat.  She has the run of the house and has pretty much adapted herself to us, although we’re still getting used to all of that energy from her.  She has a little bit of a heart murmur, but the vet says she’ll probably grow out of it, and so far it has not affected her energy level in the least.  I picked her name off a list that my other daughter Gracie wrote out.  She (or he, as I thought she was then) looked like a Moe.  And though we discovered Moe was a female, we thought the name still worked.

Woooosshhhh…there she goes again, racing past me into the diningroom.  The bell on the new collar I put on her is ringing all over the house and I fear for my diningroom tablecloth.  I just had to put my good luck Chinese bamboo higher up on another table so she can’t rip any more leaves off.   I don’t think the throw on the couch will ever be the same, and my arms and legs are covered with pink scratches.

But I love her already.  Welcome home, Moe… 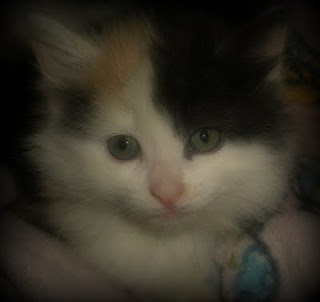