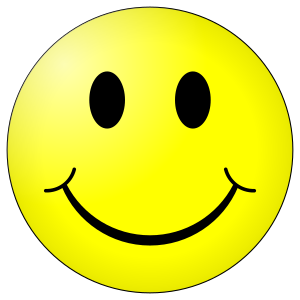 A good friend of mine writes a weekly column in our local newspaper and over the last couple of weeks he has been focusing on the topic of happiness. We are, many of us, often consumed with the desire to be happy, and look for it in the wrong places (or in the wrong things, whichever the case may be). He includes a number of lists written by others, including psychologists, of things you can do to improve your happiness quotient.

While I agree with most of the points in those lists, like fostering a positive attitude and stopping to smell the roses, so to speak, I think there’s another underlying factor at work.

Sometimes we try to pop a “happiness pill” when we are clearly not. And when we try to sweep our misery under the carpet instead of addressing it and then letting it go…all of the happy pills we take won’t work.

In other words, trying to be happy can sometimes be more about going into denial and can only make things worse. I’m not saying that we should wear our misery on our sleeve and making everyone else around us miserable too. But when there are underlying problems, pushing them aside won’t help.

I say this because I have dealt with depression myself and have family members who have experienced clinical depression and even worse, bi-polar disorder. In the latter case, it can only be treated with medication, which truly is like popping a “happiness pill”. But depression can’t be overcome simply by happy thoughts alone.

Outside of a serious or clinical case of depression, I think people are often contributing to their own unhappiness because of their expectations and the feelings of entitlement. Happy is what we “should” be and when we aren’t, then something is terribly wrong.

The fact is that even in the course of a day, you can easily bound from sadness to happiness and back again…and this is completely natural. If you expect to be deliriously happy all of the time, you are truly kidding yourself, and you will ultimately be disappointed. Buddhists say that the real problem is not the state of happiness or unhappiness, but clinging to one or the other.

Trying to cling to a happy state seems obvious, but why would we want to be miserable?

Actually, we often LOVE being miserable even though that seems an oxymoron. We love going over and over unhappy events in our minds, perhaps mentally punishing someone for some past hurt. Self-pity can itself be rather addictive.

I think the word “happiness” itself has probably been used to death and sort of comes with its own baggage now; perhaps “contented” or “at ease” are closer to what we can achieve.

Have you ever felt contentment about something? It is not a “high”, but rather a quietening of the mind and completely relaxing. If the whole world could simultaneously experience even five minutes of contentment in the true sense of the word, I’d bet you that after the five minutes was up, much of the hate, anger, violence, desire and greed would be alleviated for the following five hours. Can you imagine? Just five hours of world peace.

So here is my list for ways to achieve contentment:

These are just five points, I’m sure I could think of more over time. Each of them has given me a sense of peace and contentment in past, but it does take effort to remember and apply them. Even if only one of them stands out or works for you, keep using it and I know it’ll help you to relieve some of the misery and stress of your daily life.

Most of all, stop expecting to be happy, and ironically, you’ll probably start to!

My cousin called me up last week with the bad news. “Uncle Ken is dying,” she said, and we started to reflect on his life which hadn’t always been a happy one.

My 80-year-old uncle never married and suffered all his life from bipolar disorder. Of course, they didn’t have a name for it when he was young, but everyone knew that he wasn’t “right”. And even after he was diagnosed, there were times when he would go off his medication thinking that he was cured, only to have another manic episode, which meant that he would have to go back in the hospital until the medications could even him out again.

When I was a kid, my Uncle Ken was sort of the adventurous relative to my eyes. He had a little sports car, saw the world as part of the Canadian forces, bought himself a sailboat and always brought Dairy Queen soft ice cream and strawberries when he came for Sunday dinner. I saw him mostly at family functions, when he was either very quiet or passionately arguing politics with my Dad and his other siblings. The Jackson’s were a political bunch even if only from the sidelines.

When I had my two girls, Uncle Ken would send them each a beautiful little dress every Christmas. We lived in different cities, so the times I saw him were few and far between. He lived alone in the West End of Vancouver, and over time his bouts with depression, dementia and bad legs eventually lead to his being placed in a care facility. I don’t think he was all that happy with it at first, but after a time he began to get used to it.

The call last week was urgent enough that I knew I had to get there soon. He was suffering from pneumonia, choking on food and was hooked up to oxygen. My cousin told me that when she had visited, he hardly said two words the entire visit. I thought about leaving to see him right away, but I had invited a group of friends over for a barbecue as a homecoming for my husband, so I opted to wait a couple of days. Immediately I felt guilty, not knowing how long my uncle might actually have.

But within a couple of days I drove out to the ferries to make the trip to the mainland for what I knew might be a final visit.

I hadn’t seen my uncle for quite some time, and because of his dementia I wasn’t sure if he would even recognize me. They were giving him a sponge bath when I got there, so I couldn’t see him through the curtain.

Was he conscious? It seemed so. I heard him mutter something to the nurse, but it was difficult to get a sense of his condition at first. Then the nurse pulled the curtain back. He looked very thin because he had been refusing to eat, he was sitting up, hair combed and clean shaven, and there was no oxygen tube. There was a glass of beer on the bedside table, because it was the only thing he would consume. Well, I don’t exactly blame him for that! But he didn’t look nearly as bad as I was expecting.

At first he mistook me for my cousin who looks like me, but then he corrected himself and I apprehensively sat down on the end of his bed.

The conversation started out a little awkwardly at first. But we ended up having a very nice chat about a myriad of things; his life experiences, current events, the family, and he even told me where he wanted his ashes spread when he dies. We talked about Ted Kennedy’s passing, how marijuana can’t be all that bad, and he asked me about my cat, and I learned more about my uncle in that one conversation than I had in the last fifty-two years.

In the middle of our chat, a nurse popped in to say that he was being shipped back to his care home later that day. “Thank God!” he said, clearly relieved to get out of hospital and back to his own place.

He didn’t break a smile once during our conversation, but that was okay because I could sense that this was a “rally” day for him and perhaps the inevitable would be put off for a little while longer.

When I finally got up to leave after an hour-and-a-half, we clasped hands and he said with great sincerity “It was lovely to see you, lovely.” As I walked out of the hospital it occurred to me that I could easily have misjudged the timing and missed seeing him altogether. It was only luck or maybe some other force that I don’t know about, that brought me there on that particular day.

He is back in the care facility now, but we have been warned that things could take a turn again, especially if he still refuses to eat. His depression leaves him with little will to fight and his dementia has affected his swallowing reflex.

But for the moment, my old, cranky Uncle Ken is still kicking.

October 11, 2009 – Thanksgiving – My Uncle Ken passed away at 6pm, having refused food and medication completely for the past three days. I feel like he just decided it was his time to go, and I am grateful this Thanksgiving that I had that final conversation with him.
Goodbye, dear Unc. Love, Irene