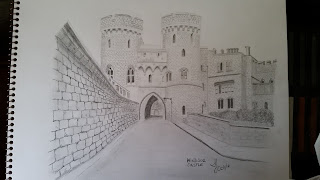 Since drawing has become more of a hobby in the last couple of years, I’ve decided to post some of my work here and tell you a bit about them. To the left is my sketch of Windsor Castle which we visited on the 4th day of our London/Paris/Copenhagen trip this past spring. I’m including the post I wrote on Facebook from London below. I loved the castle, but it was the adventure after the castle tour that mostly sticks in my mind 😉

London,
Day 3 & 4 — It must be annoying sometimes, being a tour guide. All
of us idiot tourists to cope with, asking stupid questions, looking for
the nearest bathroom.

As a tourist, though, nothing beats a
great tour guide. The ones who know how to tell you a lot without boring
you to bits. Who keep you together and moving like herding idiot cows
(with apologies to the cows). Who have tickets and whisper boxes at the
ready, breezing you through security, all the while with a smile on
their faces.

Some don’t quite live up to that level. The lady who
was our morning tour guide on Tuesday had it all together. She kept us
moving with no sense of urgency, told us a little about everything, but
not too much, and didn’t lose one cow in the process. A real pro.

The guy we had yesterday, well, he still needs work.

We had a heck of a time finding Victoria Coach Station, which was our
own doing. Buses are called coaches here, duh. Fortunately we gave
ourselves lots of time, and eventually we asked a bus driver (or is that
“coach driver”?) and he literally pointed across the street. Duh again.

We found the right coach, got on board, and patted ourselves on the back.

And then our tour guide started speaking. “How many have we got on
board?” He had to count several times. “Okay, let’s see, where are we
off to?” He wasn’t joking. I think the guy might have been at the pub a
little too late the night before.

The first part of our trip was
to Windsor Castle. We had to leave the coach (okay I’m fully British
now) several blocks away, walking on an overpass through some twists and
turns before reaching the queue for the castle, along with hundreds of
other people. Hundreds.

He got us in, through security, and told us to meet us back at the bus at 5 minutes to 12 noon.

Windsor castle was gorgeous, extravagant, opulent. I’ve run out of
adjectives. We couldn’t take pictures inside otherwise I would have
posted them. And then it was outside to find our way back to the bus.

I was sure it was down one street, and Michael was sure it was down
another. We picked my choice. And on and on, and on we went, slowly
realizing my pick was wrong. What an awful feeling. We tried desperately
to get over to the street Michael thought it was, but towns and cities
in the U.K. don’t work in grids, the streets twist and turn and bend and
sometimes don’t even connect at all.
Eventually another lady
from our tour came up behind us. I think she had been following us,
hoping we knew the way. That was her first mistake.

The three of
us tried to retrace our steps. Michael told us it was noon. The tour
guide had said that they were going to pull out right at noon on the
dot, so our hearts sank. We were only on the first stop. How the heck
were we going to get back to London? What were we going to do?

Just then, I spotted a sign that said car park and coaches. Coaches! I
know what that is! I started walking faster and faster, leaving the
other two in my dust. Coaches!

Somehow we ended up coming all the
way around entering it where we had originally driven in. I kept
running, yelling back “I think I see someone else from our tour!” And
then I spotted our coach. I have never been so relieved (or sweaty, for
that matter) in my life.

In spite of the earlier threats, they
had waited for us. As we got on, Michael the smart ass said “It’s not
our fault!” Nobody laughed.

What I learned yesterday:
1. Not all tour guides are created equal.
2. Left and right and sense of direction are totally useless in another city and country.
3. I can, actually, go along time without peeing when I’m panicking.
4. I’d rather be herded like a dumb cow than lost like Mary’s little lamb.

Other people got lost on another part of the tour which left us feeling a little less stupid.
Today we did our own walking tour of all of the famous sights we could find. Tomorrow we go on another coach tour.