More than 65 years ago, my mother embarked on quite an adventure when she boarded the Danish hospital ship Jutlandia for a year-long tour to Pusan, Korea during the Korean War. I’ve told a bit of my mother’s story before and awhile back, I even found a YouTube video with footage from that tour of Korea. You can see it here if you are interested in knowing more.

Sometime during that year, the Jutlandia sailed to Japan, possibly to re-supply and to give the passengers, doctors, nurses and support staff a bit of a rest from the war itself.

Having immigrated from Denmark to Canada shortly after the war, my mother always told me that if she had flown from Vancouver to Japan, she would have travelled the circumference of the earth. She never had that chance. When she died in 1972, my father spread her ashes in the back yard at my suggestion. All I could think of at the time was that my mother loved the garden and the flowers. I obviously didn’t give it much forethought, and when my father and stepmother moved out of the house years later, my Dad decided to save me some of the dirt from the back yard. He put it in an old antique creamer that my mother had bought years before, and I’ve kept it on a bookshelf for all these years since.

A few months ago, my youngest daughter decided she was going to take a trip to Japan to visit a friend who is teaching English there, and the thought hit me: why not send some of the dirt to Japan with her so my mother could finally make it there?

I made the suggestion and my daughter was immediately on board. The only thing we were worried about was how she was going to explain a bag of dirt to customs and security at the airport! So we devised a scheme. 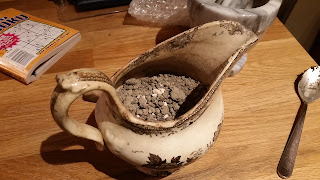 We took some of the dirt from the creamer, and my daughter ground it down to a fine powder. 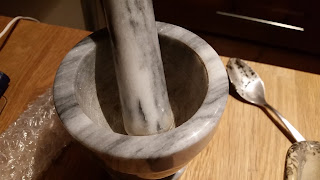 Then she added a little bit of water and made a tiny pancake that could fit into an eye shadow make up container. 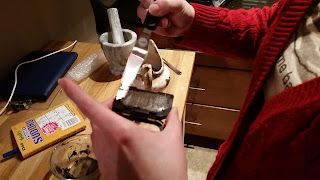 When it dried, she dusted it with a little bit of glitter just to give it some panache! 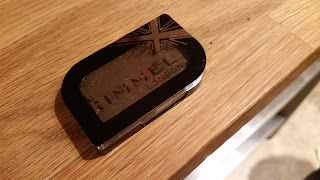 I told her that when she got to Japan, she should wait until she found the perfect spot to spread it.

The other morning, I got a text message on my phone at about 5am. Knowing it would likely be from her, I got out of bed and went to the living room to read the message. It was a picture that I didn’t quite understand at first because there was no accompanying text: 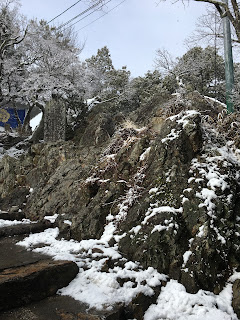 A snowy scene on what appeared to be the side of a mountain.

Then another pic came in: 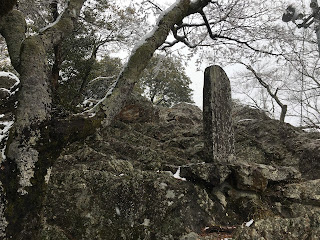 It looked like some sort of stone monument from the same place. And then another picture came in and it all started to make sense: 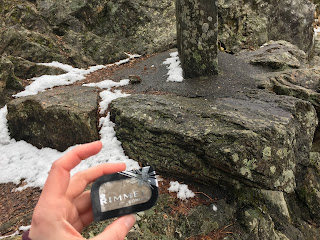 This was the little make up container that we had put the dirt into. 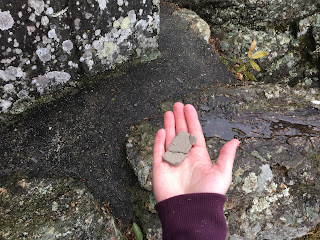 The next thing I received was a video that my daughter took of herself crumbling up the dirt and sprinkling it into a little pond of water beneath the stone monument. And finally, she sent a picture of where she was: 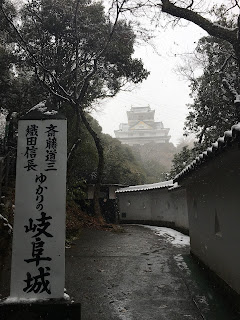 This is Gifu Castle, about 40 or 50 miles north of Nagoya, where my daughter is staying during her visit. She sent other pictures of herself walking around the castle grounds in the snow. It was beautiful. It was perfect. I always told my daughter that she had inherited my mother’s love for the beautiful, the glamorous, the lavish. It certainly didn’t come from me! So I thought her choice of placing a little bit of her grandmother at the base of a castle was exactly the right place.

Let’s face it, it’s just a little bit of dirt from a garden that had my mother’s ashes spread in it 45 years ago. I don’t know if it was from the same area, or even if my father remembered exactly where he spread her ashes. But it doesn’t matter. I think my mother would be absolutely delighted that her granddaughter would smuggle a tiny part of her memory to another country so that she could finally claim to have made it all the way around the earth. Furusākuru. Full Circle.