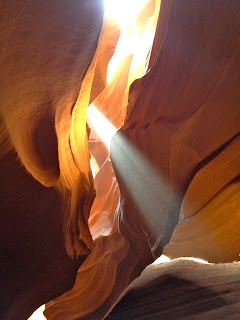 I must have been just conscious enough to hear the ping on my iPad, which was on the night table beside my bed. I knew what it meant.

It was one of the news organisations I was subscribed to announcing the winner of the U.S. election. And I knew who that was, but I refused to check it out and confirm it. Who cares? I thought to myself. I rolled over and tried to sleep a little more. But I couldn’t. The whole night had been a write off anyway.

Like many others, in the last few months I have been glued to every news organisation I could find an app for, with my TV on in my little office almost all day, and scanning Twitter constantly, hungry for news of any new scandal about him. I won’t say his name because it makes my stomach churn. And every day, it seemed he found a new low.

I rolled over and reached for my iPad. Okay, I thought, I’m not going to read the results, I’m just going to log on to Facebook. There was still a tiny speck of hope in me that things had turned around and I wanted to hang on to that for just a little while longer. Then I came across a post from Dan Rather, who was attempting to calm the fears of his readers. I have been reading a lot of his posts in the previous weeks, and he has been a thoughtful, intelligent voice of reason for me, someone who can still my deepest anxieties. At the end of his post, he wrote the word “Courage”. And I cried. I don’t think I’ve ever, ever cried at the results of an election before. It surprised me.

Later on in the morning while I sat drinking coffee with my husband, he said “Remember, things aren’t always as good as we imagine, or as bad as we imagine.” And that’s when it hit me. I have to find some kind of peace with what has happened, and especially with myself. So I’ve barely paid any attention to news of any kind in the days since.

I know what’s going on. Pundits are yabbering on and on about what this means, what’s going to happen, why the election went the way it did. After every commercial break, CNN is declaring “BREAKING NEWS!!” even though they’ll be talking about the same thing they were 10 minutes before. Reporters will be following his every step, his every word as he gloatingly grabs his prize. And I don’t want any of it.

I also have to still my own horrible thoughts, which come out of nowhere, even on a nice, quiet walk in the sunshine. The temptation is to imagine what will be a very different future, and how this could even have happened.  But the fact is that I am powerless, there is nothing I can do except to stop allowing myself to be swallowed up by fear. I’m still here. We’re still here. There is good in world, good people with big hearts who do wonderful things.

Instead of imagining the Apocalypse, I will focus on the positive and work on being a better person. The world needs us all to become better people. That’s the whole point of our existence, isn’t it?

Instead of fearing the future, I will remember that human beings have always found our way past adversity, through the worst of circumstances created by mother nature, and our own nature.

Artists and poets always seem to find a way to reveal to us the truth and the beauty in ourselves. And so I leave you with a phrase from Leonard Cohen, who sadly passed away just yesterday.

There is a crack in everything,
That’s how the light gets in.