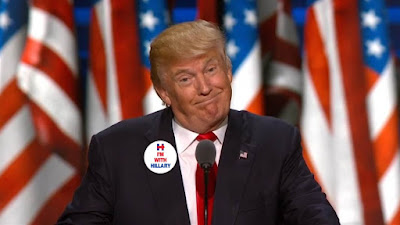 I`ve been trying to avoid temptation, but I think it’s pretty much impossible now not to mention what is going on with our neighbours to the south of us. Yes, you know what, or should I say who, I’m talking about.

I have a small confession to make: I used to love watching Celebrity Apprentice. I’m not usually a reality show person; I’ve never watched Dancing With The Stars or The Voice or American Idol. But for some reason, Celebrity Apprentice caught my attention and I watched most of the seasons that it was on. I wasn’t a fan of Donald Trump, really, I just loved the competition. The boardroom scenes, while dramatic, were mostly The Donald’s chance to show off. I almost got the impression that he thought it was all real.

The 2016 Presidential Election makes me think quite the opposite; that the Donald doesn’t realise THIS IS REAL. The U.S. is a big, influential, and important country, it’s not a gambling casino.

But taking a few steps back, I wonder how in the heck he managed to become the Republican nominee. I imagine there are a number of Republicans who are wondering the same and I don’t know that anybody really believed the guy would get this far.

There have been countless psychological assessments of the man since he started running; he has been described as a narcissist, an extrovert, misogynistic, racist, and, one of my favourites “an existence unmolested by the rumbling of a soul”. He is obnoxious, belligerent, completely self-serving…and the list goes on and on.

He is not…presidential. In the least.

But what really worries me, what scares me to bits, are the numbers of Americans out there who think he is. They’ve made him the Republican nominee, they show up by the thousands to his rallies, they are absolutely and resolutely behind this madman. I. Just. Don’t. Get. It.

I understand that politicians have had a negative reputation almost since the creation of the word “politician”. They are often extroverts and obnoxious loud mouths, or the opposite. Boring. They can be heroes one minute and instantly unpopular the next. We adore them, then abhor them. There are some who actually do good things, but the ones who get the most attention are the drama queens. Up here in Canada we have them too. The one who comes instantly to mind is Rob Ford who was the mayor of Toronto. For those of you who don’t know, Ford passed away awhile back from cancer.

But I think the real phenomenon that has become the force behind the Donald’s popularity is that he isn’t a politician. People like that. It doesn’t matter to them that he has absolutely no experience (nor does he seem to care to), they like that he is like them. Of course, he isn’t, not one bit. But that’s the impression they have. You hear these followers being interviewed on TV, expressing how they love the way he talks, the things he says, because it’s not the way politicians usually speak. They interpret this as a form of “honesty”, but of course if you read or hear much of what he has been saying in the last few months, most of it is bullcrap. He says one thing and then the other, but he says what they want to hear with absolutely no filter. They might even be shocked or disagree with some of the things he says, but they still support him. They’d rather have him as President than someone who is actually competent to do the job.

The rest of America, and the rest of us who live outside the U.S., feel utterly helpless. Utterly.

I don’t even like to think about all the terrible things that would happen if he became President, so I won’t go into it here. But it would be awful, awful, awful. It would be a nightmare. I bite my nails watching the polls at this point. Of course, the only poll that really counts is on election day, but I still watch with a mix of horror and fascination. Some days I think there is still hope, other days I just shake my head in disbelief that it even got this far.

This isn’t a reality show, Donald, this is real life. REAL LIFE!

So I’m begging you Americans who might be reading this: Don’t Do It! Don’t let it happen! It’s not even funny anymore.