Today is Mother’s Day. I can’t remember the first Mother’s Day I lived through without my Mom, but I’m sure I felt pretty badly. I would only have been 15, and that age can be weird and overwhelming anyway, so being without a mother on Mother’s Day would have only added to that strangeness.

But this isn’t about me. This is about Fanny.

I have always loved her name. I think she may very well have been named after Fanny Brice who was a popular American model, singer and theatre actress in the 1920s. My mother’s parents had actually lived in New York for a period of time, and her first two siblings, Roy and May, were born there. They were a part of the throngs of Europeans coming to America to find their fortune in the early 1900s. Except that my grandparents were a little strange in that they actually went BACK to Denmark after a few years of living in Brooklyn. I guess the American Dream didn’t live up to the hype for them.

So my mother, Fanny Helga Corfixsen, was born in Karrebeksminde in Denmark on May 6, 1920. She would, in fact, have turned 95 this past May 6th.

My grandfather was a fisherman and the family, which eventually grew to five kids, was dirt poor. While my Dad didn’t have any qualms about having grown up during the depression, my mother actually seemed a little ashamed of her poor childhood, from what I remember her telling me. She talked about the white beaches of Karrebaeksminde and how the “rich” people had summer houses there. She talked about being dirty and feeling ashamed of her lack of cleanliness. Other than a few scant memories, I know very little else of her young life.  I do know that when she got older, she started cleaning houses to make money, and one of her clients was a doctor who convinced her to go to nursing school. And so my mother eventually became a practical nurse, leading into the war years. Denmark was occupied by Germany during World War II and at that time my mother started working as a nurse in a mental hospital.

I knew about her time working in the mental hospital in Copenhagen, but I what I didn’t know at first was that my mother was also a part of the Danish Resistance. I found that out from someone else. Among some of my mother’s possessions which I still have, was an envelope with a man’s name and a return address somewhere in Ontario. The letter was old and I didn’t think much of it until one day, out of curiosity, I did some research and found a more recent address for him, and I wrote him a letter (this was long before email and Facebook!). To my surprise, he wrote back, telling me that they met in Denmark while they both worked for the Danish Resistance.

During the German occupation of Denmark, the Danes searched
for any and all Jewish people by their names and helped them escape to unoccupied
Sweden. One of the ways in which they
accomplished this was by committing them to a mental institution and keeping
them there until they could sneak them out of Denmark by boat to
Sweden, helping them escape their Nazi hunters. Now I don’t know if my mother was actually involved in this for certain,
but the facts suggest that there is a good possibility. This is an excerpt from a website called “Rescue of the Danish Jews”:
“Dr. Koster, who was in charge of Bispebjerg
Hospital, was instrumental in arranging for hundreds of Jews to be hidden at
the hospital before they made their escape to Sweden. The psychiatric building
and the nurses’ quarters were filled with refugees, who were all fed from the
hospital kitchen. Virtually the entire medical staff at the hospital cooperated
to save Jewish lives. Once it became known among Danes what the hospital was
doing, money was donated from all over the country.”
To put it in perspective, because of this and other forms
of rescue, 99% of Danish Jews actually survived the holocaust!  This is an amazing statistic, whether or not
my mother had any involvement.  Not only
that, but when they returned after the war, the Jews found their homes and
possessions intact, as compared to other countries where Jewish homes and
possessions where damaged or stolen in the interim. The Danes made sure that nothing belonging to their Jewish neighbours was touched.
Only a few years after the end of the Second World War, my mother again became involved in another conflict;  the Korean War.  She volunteered with the Red Cross and became a nurse on the Danish hospital ship Jutlandia. 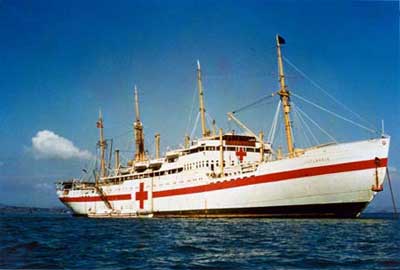 The Jutlandia, pictured to the left, was a fully equipped hospital ship, complete with operating rooms and facilities to treat injured UN and South Korean troops and, along with the captain and crew, a full staff of doctors, surgeons and nurses. My mother spent a year on that ship, but the Jutlandia was actually in service during the entire Korean War. It was really like a MASH unit, if you remember the old TV series of the same name. My mother told stories of how they would go from having to treat an overwhelming number of patients over many hours, sometimes days on end, to having absolutely nothing to do, which, she claimed, almost turned them all into alcoholics because they were bored out of their minds. There were many stories, especially in the Danish newspapers, about the adventures of the Jutlandia and my mother kept many clippings in a scrapbook that I still have.  This picture was taken of my mother and one of the surgeons when he was recovering from an illness: 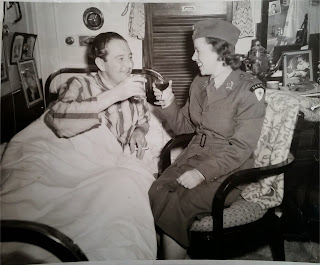 (I guess cigarettes and alcohol were considered medicinal at the time!)
The Jutlandia was the only hospital ship at the time that also treated Korean civilians at the insistence of the doctors on board.  There were a number of South Korean children who were either injured or who had lost their parents, who were taken on board and fed, clothed and given blankets.  It was a miserable time for so many.
However, my mother seemed to have a lot of happy memories from the ship too, among them the port cities they stopped at on their journey to Pusan, South Korea and back to Denmark again. I still have tiny, paper thin tea cups and chop sticks and silver that she brought from Japan, but there were many other ports of call along the way.
Only a year or two after she arrived back in Denmark, my mother boarded another ship and immigrated to Canada, landing in Montreal and taking the train across the country to Vancouver. She worked as a nurse in several places, having to learn English by the seat of her pants.  One story she told was when she was working near a logging camp near Pender Harbour.  She had a small Danish/English dictionary to help her translate, but when a logger came in one day claiming he had a “bellyache”, she was flummoxed.  And what exactly is a “pain in the nice word for ass”?  Could there be more Canadian cultural shock for a young Danish immigrant?
But she loved Canada and told me that one of her proudest moments was becoming a Canadian citizen.
My mother was 35 when she met my Dad on his bus.  After a short courtship, they married in January 1956 and I was born the following year, July 1957.  They decided not to have any other children, so it was always just the three of us. I had a wonderful childhood with two terrific parents who made me the centre of their universe. It doesn’t get better than that. But my happy little world began to fall apart when my mother found out she had Hodgkin’s Disease, a cancer of the lymph nodes, in 1968. She died on May 25th, 1972.
I often wonder what my mother would think of me now. I still regret that I’m not as great a cook or house cleaner as she was, which sounds silly, I know. When I dust the furniture I inherited from her, I think of how she used to throw up her hands in despair at my laziness, my disaster of a bedroom and my refusal to eat everything on my plate. I know now where all of that comes from, of course, but I was just a stupid kid with no sense of the real world back then. My world was so Leave It To Beaver. There are so many conversations I would have loved to have with her, so many moments I would have been thrilled to share with her. So many questions I would have asked about her life.
But I count myself very fortunate that I had a wonderful mother who, along with my father, taught me so much and gave me such a happy life.  I am proud of who my mother was and what she did in her short time on earth, and I’m especially thrilled when I see some of her qualities blossom in my own children.  As someone pointed out to me recently, they live on in us.
Yes, I can see they certainly do.
I haven’t had the chance to say it in awhile, but Happy Mother’s Day Mama,
All My Love,
Irene