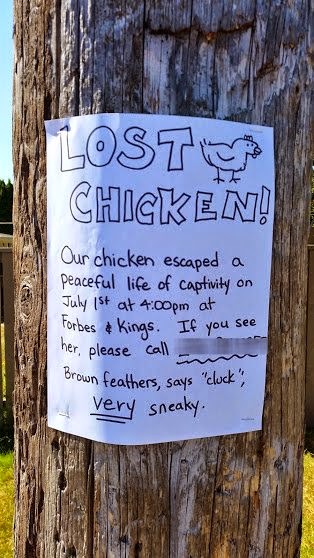 Because it has recently become legal to do so, a few people in our neighbourhood have started backyard chicken coops in the past couple of years.  I see two or three coops when I’m out for my walk, and occasionally hear the feathered residents clucking away as I pass by. One morning, I watched as a small group of daycare toddlers were brought over to a wire fence by their adult caretakers to see the chickens for the first time.  It was endlessly fascinating for them.  What a cool thing for kids to see in their own neighbourhood, rather than having to go to an actual farm, farther away.

So I had to laugh the other day when on my walk I came across the sign to the left.  Lost cat and dog posters abound, but this is the first time I’d ever seen a lost chicken poster. It was stapled on a wood post near the coop the toddlers had visited, and I had to admit as I walked on that I kept my eyes open for the escape artist.  Where would a sneaky chicken hide?  How would it eat?  How long could it possibly last out there in the big, bad world?

What’s even more interesting is that not only is the date specified, but the actual time.  4pm.  The owner must have actually witnessed the escape.  Maybe a door was left open and the escape happened before the owner could do anything.  Did he or she actually chase the chicken?  How fast can a chicken run?  I Googled that question and the answer was anywhere between 9 and 15 mph.  If the chicken got a head start and disappeared in some bushes, I guess it would be easy enough to lose it.

Chickens can’t fly very well, but their ancestors could.  According to a vet expert on The Straight Dope: “The ancestor of modern chickens, the wild red jungle fowl (also a darn good name for a rock band), wasn’t a great flier, but he could get around when he had to. The entire poultry family (chickens, turkeys, guineas, ducks) are adapted to living on the ground. Their beaks are better adapted to pecking off the ground, their feet to walking instead of perching, and their wings are smaller than other birds their size.”  He goes on to say that we humans stepped in and started breeding them to grow larger pectoralis muscles (that’s the chicken breast), so it became even more difficult for them to fly.  I suppose if our sneaky chicken was desperate enough, she got those tiny wings flapping pretty good and it helped her get away.

In one way, I’m rooting for the chicken.  She was brazen, she was bold, and maybe she just wanted a bit of an adventure.  But I’m pretty sure she wouldn’t last too long out there on her own.  So keep your eyes open for her, would you?  She has brown feathers and says “cluck”.