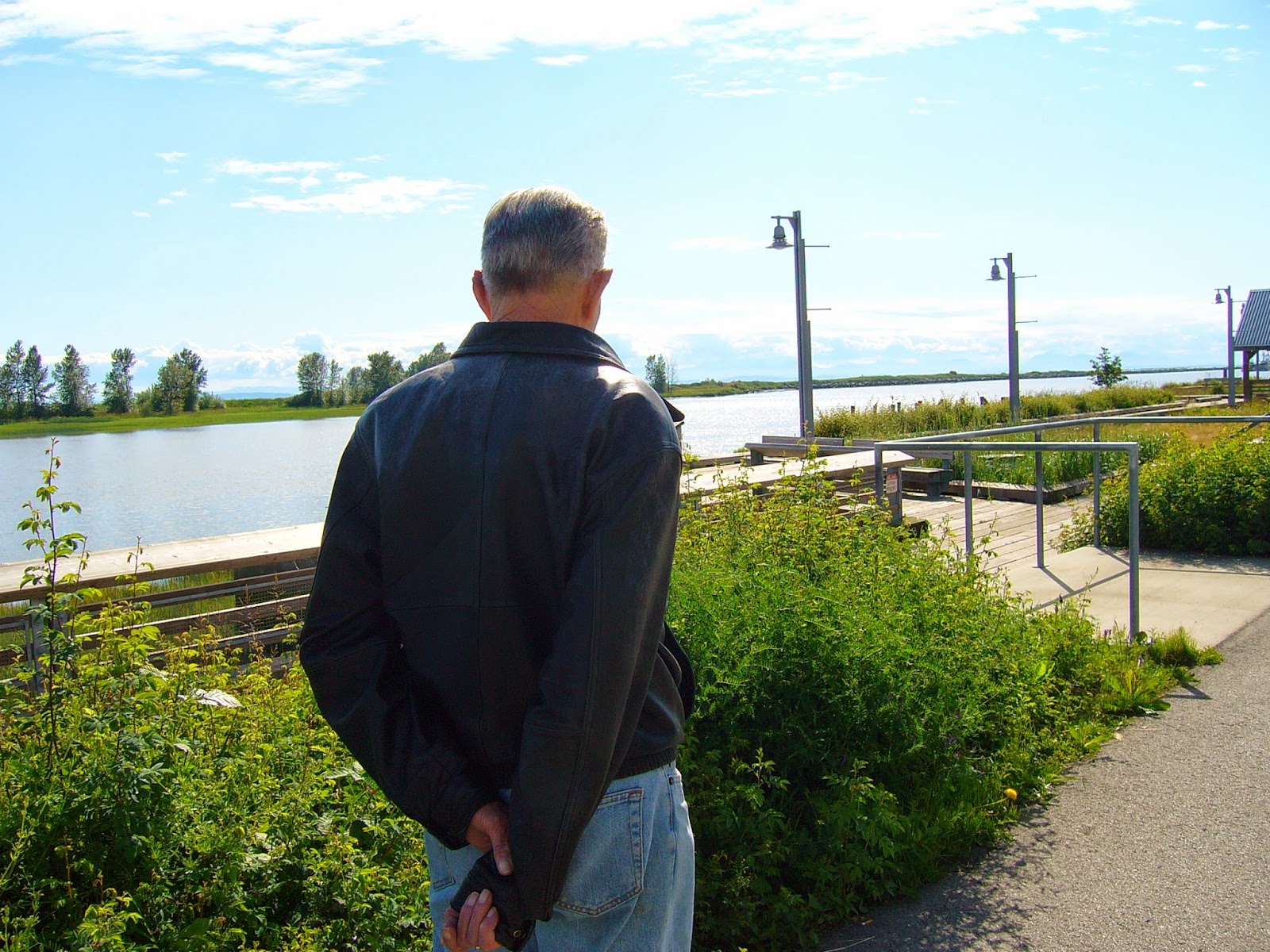 The day that my father went into a care facility several years ago, I remember trying to cheer myself up by saying, in spite of his change in circumstances, “He’s still here.”  It was a way to remind myself to be fully in the present, especially when I was with him, and to make the most of what time we had left together on this earth.

That became my mantra over the next few years through the many lows as his disease progressed.  Oh, there were highs too.  The highs were when we had an unexpectedly good conversation or when he made a joke (which he managed to do even near the end of his life), and when I was able to get him to answer his phone and tell him I loved him.  And one of the best highs for me was when he’d sing along to his old favourite tunes, with a sparkle in his eye and a little more of a spring in his step.  The greatest joy for me was that he always remembered who I was.

It’s been just almost seven months since my old Pop passed away, and this past Father’s Day was my first without him.  The year following someone’s passing is full of “firsts”.  How far have I come and what have I learned?

Take A Moment – it’s important every now and then to stop and ask yourself how you’re doing, kind of like an emotional, self-awareness scan.  People do that for you a lot in the beginning, just as your bereavement begins, but after a time they stop asking and you have to continue.  It’s not about feeling sorry for yourself, it’s about being aware of how much time you spend being sad.  By doing that, I am conscious of the fact that my grieving does become less and less, although it can hit me unexpectedly for odd reasons. It’s mostly important to realize that it is easing.

Let It Flow Then Let It Go – those unexpected moments when it hits you can be caused by the oddest things.  I saw an emotional scene in a TV show the other day, when a horse runs away from, and then decides to return to the man who released it.  It had nothing at all to do with death, but it was emotional.  And when I cried about the horse, it turned into crying about my Dad.  I just let it happen instead of feeling stupid at crying, which I am sometimes tempted to do.

Don’t Feel Guilty – this was certainly something I didn’t know I would experience, especially in the beginning. I would laugh at something, and then suddenly be hit with a sense of guilt, realizing that I’m alive and able to laugh but my Dad isn’t.  To get past it, I would have to talk myself through the feeling, reminding myself of what my Dad would most likely say to me;  that this is my life to live and I shouldn’t spend too much time worrying about his.  I let him speak to me that way sometimes, because I know what a pragmatic, down-to-earth person he was.  That helps a lot.

Take Comfort Wherever You Find It – I am not a religious person, but I have found comfort in certain thoughts and the occasional epiphany coming to me over the past few months.  One was the awareness that my father does, in fact, live on through me.  I have his genes, I have his words in my head, his stories and views of the world.  More and more his words and expressions, his jokes and stories come back to me, and I enjoy and appreciate them more than ever.  My daughter says that I sometimes move or say things in the manner of which my father did.  Sometimes I see my daughters do or say something that I or my husband would do too.  When we have children, they are an extension of ourselves and they are an expression of our drive to continue as a species.  For my father and my mother, I am that.

One of the most surprising initial reactions was my sudden and very real awareness of my own mortality.  One of my guitar students who is about the same age as me told me that recently his elderly mother, who is going through struggles of her own, pointed a finger at him and said “You’re next!” Well, my Dad would never thought to have done that to me, but when he left the earth, that’s what I was left feeling.  I’m not sure if it’s because I don’t have any blood siblings, but I have never been this acutely conscious of the fact that I’m going to die one day.  It is startling and sobering.  And frightening.

I read somewhere once that we spend most of our lives in denial of death.  I suppose that’s a pretty necessary thing to be in denial of, when you think of it.  I mean if you ran around fearing death at every corner, what kind of misery would that be?  In another blog post a few months ago, I described how my husband and I were sitting and watching a Hawai’ian sun set one evening when I was overcome by grief.  And suddenly out of nowhere, a school of fish simultaneously jumped out of the water to avoid hitting the rocks.  It was so startling that it jolted me out of my sadness.  And what it made me think was “This is life, Irene!  Live it!”

All those times I reminded myself “he’s still here” were a comfort to me back when my father was alive.  They brought me a sense of appreciation.  I looked deeply into his face and listened carefully to each word, and I hugged and kissed him and told him I loved him.  Sometimes we just sat quietly together, and that was good too.  I was absolutely and totally attuned to him.  Thank goodness I had the luxury of time and the wherewithal to experience that.

After reflecting on that little phrase and what it meant at the time, I have now pointed it towards myself. The sky is still blue and the sun still shines.  When I get up in the morning I hear the birds, not just at the back of my mind, but I really hear them.  I try to be in the moment, take a deep breath, smile at my family and friends and realize how much they mean to me.  Little problems in life are simply that:  little.