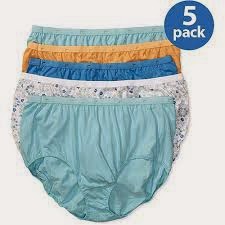 Warning:  not for the squeamish.

I want function, not flair.  I just need some decent, practical, cotton underwear.  I don’t want to spend $11 on one pair of frilly, lacy things that are just going to itch all day and make me cranky.  It’s embarrassing how long I hang on to the old pairs because I can’t find any new pairs.

My mother used to tell me she hoped I was donning new underwear daily because I wouldn’t want to get into an accident and the ambulance attendants noticing that I hadn’t changed them for awhile.

That scared me pretty much into keeping my underwear meticulously clean.  Isn’t it weird what parents say sometimes, the things that go on to haunt you for the rest of your life?  What on earth made her use that scenario?  Yet, for the last few months I have secretly hoped I didn’t find myself in an ambulance.  I mean, that would seriously be embarrassing.

My quest for replacement underwear almost reminded me of my quest for new runners.   Read all about it here.

Back to my undie debacle:  one time in a momentary loss of sanity, I grabbed a package of underwear from Costco on my way to the checkout.  When I tried them on at home (who’d want to try them on at Costco?), I realized that I bought a bunch of pairs that, when I pulled them up, nearly went right up to my chest.  Looking at myself in the mirror, I screamed.  That was the last time I bought underwear at Costco.

I used to get my underwear at Zellers.  They had those nice, boring packages of Fruit of the Loom that suited me just fine.  The only thing that was wild about them was the occasional floral pattern.  Or maybe some stripes.  In desperation, I tried all of the big department stores, but time and again I could only find the frilly ones that cost $11 each.  And those were the cheapest pair. I even broke down and walked into an intimates store meant for an obviously younger clientèle.  To my surprise and delight, I found some hot pink cotton underwear that were perfect.  I picked them up and was ready to buy a whole bunch of them when I noticed the phrase “sweet cheeks” on the rear end.  It was either that or the pair with exclamation marks.  I just can’t picture myself with large, pink !!!’s on my butt.  Even if I know nobody can see them, I’ll know they’re there.

Wait just a minute, what’s the !!! supposed to mean anyway?  Surprise?  Perhaps at the circumference of my cheeks?   Or just a shock reference?  If you can see this, you shouldn’t be looking? You can understand, I’d be in a constant state of anxiety just wondering.

Interestingly enough, I recently had similar issues looking for a new bra.  It seems that 99% of bras out there these days have that kind of padded cup called a “molded bra”, that is, frankly, supposed to make you look like you don’t have any nipples.  They SAY that the real purpose is to make the bra look “seamless”, but I’m not buying it, I think it’s the nipple thing.  For pete’s sake, everybody has nipples, so who are we kidding?  And secondly, I DON’T REQUIRE PADDING.  I cannot express that strongly enough.

But do you think I could just find an ordinary, boring bra?  The kind that I’m used to, like Playtex or Wonderbra, only seem to have DDD sizes. (For you of the opposite gender, size DDD would fit a couple of small watermelons).  Wait a minute, why are you guys reading this anyway???

I don’t need padding but I’m not that big, so neither option seemed right for me. In my sensible sensitives search, the only other type of bras I have come across seem to be right out of a Victoria’s Secret magazine.  I’m sorry, I can’t imagine wearing a bra with diamond studs or feathers, let alone tiger stripes or purple lace.   Again, even if nobody else can see it, it’s the knowing.  It’s the knowing.

Finally, the other day I compromised and bought the “seamless” bra.  It will take me awhile, but I’ll get used to the nipple-less façade.

And today, much to my relief, I managed to find the boring old Fruit of the Looms at Walmart.