Unlike my shoe-crazy daughters, I don’t buy shoes very often.  In fact, I tend to pretty much live in the same shoes every day.  My excuse is that I go for a daily walk and I don’t want to have to change shoes. The only time I wear different shoes is on a special occasion.  Like Christmas.

I’ve been wearing the same kind of white athletic shoes for at least twenty-five years.   I want to call them “runners” because that’s what we called them in the 70’s and of course, they’ve come a long way since then.  Some of them don’t even look like “shoes”, more like foot gear from Mars.  Something out of Star Trek.  You’ve seen them.

Mine have always been white.  I like the clean look of white shoes.  My most recent pair are at least two or three years old.  That’s two or three years of almost daily wear, so they are not really white any more, but they are very comfortable.  My daughter’s boyfriend’s mother has exactly the same kind of shoe and swears by them like I do.  But realizing they were running out of time (ha, a pun there), a month or two ago I searched high and low to find another pair exactly the same to replace them.  But you know, shoes styles change as often as you change underwear.  Bad comparison, but that’s all I could think of.

The other day I was out for my usual walk.  It had been a particularly wet day, with thunder showers and puddles galore, but I was in my comfortable runners and I didn’t care.  And then I realized I had a soaker in my right shoe.  Arrgghh!!  I carried on with my soggy walk and when I got home, I looked at the sole of the offending shoe and realized it was half coming off.  I decided I needed to go out immediately and get myself a new pair.

Being the time of year when kids are getting back to school, I thought there would be lots of runners out there for me to choose from.  Well, there were, but they were not white.  They were neon colours;  neon pink, neon orange, neon green or a combination of all three colours and more, with all sorts of weird bits and pieces attached to them. And then, much to my delight, I found a pair of white ones.  They were on sale too, my lucky day!  So I excitedly had the sales lady check in the back for a pair in my size.

I went from shoe store to shoe store in the mall and nowhere could I find what I was looking for. Not only that, but many of them were $150 a pair or more.  Ouch.  I briefly entertained the notion of a pair that were neon pink and black.  But I just couldn’t do it.  As I was going from store to store, I started looking at other ladies walking around the mall and noticed what kind of shoes they were wearing.  My research on the subject brought me to a stunning conclusion:  the only women wearing white athletic shoes were at least my age or older.  Mostly older.  Crap.

I went home shoeless, and pondered my predicament.  I was either going to have to give in to a new style or wait until I could find what I was looking for, which didn’t seem very hopeful.  I was forced to change out of my wet shoes and into a pair of leather shoes, which totally threw me. But I bravely carried on with my day in spite of my discomfort.

Yesterday I decided I had to go out and look yet again because leather shoes weren’t going to do it for me, so I chose another mall further away.  I visited every shoe store in the mall with no luck and finally ended up in the only one I hadn’t yet visited, a Foot Locker.  Much to my surprise, a customer, a lady about my age, was trying on a pair of those neon ones, and then another pair, and then another, all under the watchful eye of a young male employee.  I scanned the wall of single shoes.

Eureka!  They had a lovely pair of bright, white Nike’s.  The only thing on them that wasn’t white was a very pale blue Nike logo.  I could live with that. I grabbed the single shoe and patiently waited for the young man to be finished with the other customer.  She was taking a long time, which in turn gave me time to think.  Suddenly I felt really old, standing there with my bright white Nike shoe.  I sombrely put it back on the shelf.  Was I going to be the last person on the planet searching for bright, white athletic shoes, or was I going to finally come into the twenty-first century with my footwear?  I started to walk out of the store, depressed and defeated.

As I was leaving, there was a rack of newer model shoes just past the doorway.  I looked at them and saw a pair that I thought just maybe I could live with.  They were not neon, but they were black and grey.  Black would be a real departure.

But winter is coming.  No white after Labour Day, they say. 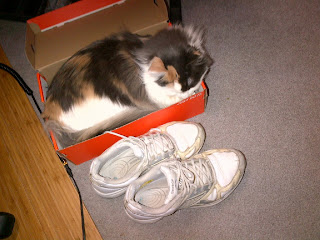 Moe found a use for the shoe box.  Beside her are my old, worn, sort-of-white runners. 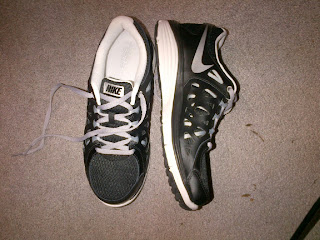 To the right are my new athletic shoes.  At least they look like runners and not those strange Mars-like foot apparel.