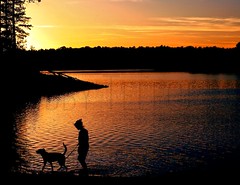 A few months ago I was walking near the boardwalk in Steveston where my parents live when I noticed a lady in the distance walking her dog.  As I got closer, I realized that she was actually half-carrying him with a harness that held up his back legs while his front legs propelled him along.  She gently helped him when he needed to do his business by taking him out of the harness and patiently waiting while he did his thing.  Then she cleaned it up and carefully put him back in his harness.  He was a German Shephard, so it wasn’t an easy task for her.

I continued to walk past them as this was happening, and kept looking back to see how they were progressing until the tears in my eyes made them almost invisible.  It was such a beautiful demonstration of love and compassion for a pet.  On another walk only about a month ago, I saw them again.  This time, the dog was in a wagon lying on a blanket as the woman pulled him along.  I guess his front legs were giving out too.  It gave a whole new meaning to taking the dog for a walk.

Now I’m not an over-the-top pet owner, and I scoff at how some people talk about their pets as if they were their children…but I understand the love behind it.  Last week our 17-year-old cat, Picard, who suffers from failing kidneys and a hyper-thyroid condition, became very sick.  I woke up on Saturday morning, realizing he had been throwing up all around the house.  His skinny body convulsed again and again even though he had nothing left in his stomach.  It finally settled down, but he did what all cat owner’s know is a bad sign;  he went down to the basement and hid away.  Taking him to the vet was out of the question.  Picard freaks out at the very sight of his pet carrier, let alone a ride in the car.  He has always been a difficult patient, and we made the decision long ago that we wouldn’t bring him there unless absolutely necessary.  So I waited to see what would happen.

My husband and I had a golf game to attend, and before we left I checked on Picard who was now sleeping in his little hideaway.  I had to work hard at not worrying about him for the whole afternoon, and kept checking in with my daughters who were keeping an eye on him.  Still sleeping.

The next day he came upstairs for a bit, but refused to eat.  Another bad sign.  I had to give him his medication, a little flavoured pill, and of course he wouldn’t eat that either.  Later on in the day my daughter suggested that we try sticking it in his favourite treat.  It was the last resort.  We cut a little piece out of the treat and pressed the little pill inside it.  My daughter went downstairs to Picard’s hiding place and gently offered it to him.  I couldn’t see what was happening because he was behind a mini-fridge, so I just stood and watched my daughter.

Much to my surprise, after a few minutes she said “Done!”.  He ate the treat and got his medication.  What a relief.

Very slowly over the next couple of days, he started to eat and spent more time upstairs with us.  I wouldn’t have believed it.  That cat has survived so many things over his lifetime that I was almost certain that he was out of lives.  He is still very weak, he is pretty much deaf and sleeps most of the time, but he is okay for now.

I do dread the day that he finally goes.  My daughters don’t remember life before Picard…they were four- and six-years old when when we picked him up from the SPCA as a nine-week-old kitten.  He has always been in their lives and they have been like little mothers to him, though sometimes not in a way to his liking!  He has endured being dressed up, hauled around in the most uncomfortable looking ways, and smothered with more smooches than a cat should have to put up with.  But I’m absolutely sure that the reason he has lasted for these past months with his condition, is that he has three mothers who love him more than anything in the world.

So today I’d like to say Happy Mother’s Day to all of the women and girls out there who have become like mothers to their pets.  It is great practice for caring and compassion, the very definition of “Mother”.