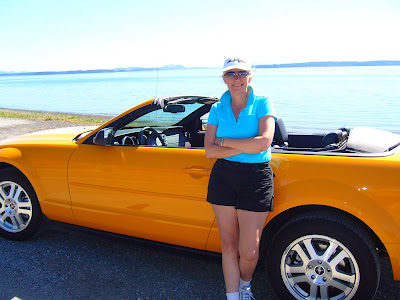 Well, I had to turn the Mustang back in yesterday…how depressing!

But I had one heck of a birthday. Many, many lovely wishes, emails, cards, flowers and gifts came my way. As my Dad would say, I’m a lucky dog! Thank you to all of you who made it a special day (week/month!) for me.

I started off my birthday with the gift of a bottle of Dom Perignon from my wonderful husband. After I was up and ready, we took a drive to the Empress Hotel, the Willowstream Spa, more precisely. If you arrive early, you can try out the steam room and sauna and then take a dip in the mineral pool, which is what I did. I don’t think I’ve been in a steam room before. I was sitting there, soaking wet with little drips from the sweaty ceiling splashing my nose, thinking this must be the Amazon. All that was missing were the monkeys hooting “ooooh, ooooh, ooooh, aahh, aahh, aaahh”. Okay, and the jungle. That was missing.

I didn’t try the sauna, I was about the colour of a beet coming out of the steam room and thought it might not be the best thing for someone like me with high blood pressure (arrghh). So instead I wiped myself down and wandered off to the mineral pool. It was quite cool and I was by myself so I lounged around for awhile listening to the urns pouring continuous, streaming water…thinking about being in Greece. This would be like a Greek bath, without the olives. Oh, and no bouzoukis either. And of course, there were no Greeks.

Then it was time to wait in the lounge for my masseuse. It was a he. I’ve never had a massage by a male, so I admit I was a little apprehensive. If he was cute, I’d be in for it. If he wasn’t cute, I’d be disappointed, but somehow relieved. What to wish for, what to wish for??

I forget his name. Is that bad??

He lead me upstairs into a room. On the massage table (well, it’s more like a bed than a table!), with neatly folded sheets and puffy blankets, there was a little bouquet of dried lavender sprigs. He told me to get under the covers and take a good, long whiff of the lavender and let him know when I was ready. Out the door he was, and off came the big, white robe and under the covers I went rather quickly, and took my big whiff. Okay, I’m ready.

Over the next hour-and-a-half I was kneaded and pummeled and rubbed and rolled until I thought every cell and muscle in my body had been completely tenderized. I started on my stomach, and halfway through I had to flip over. He pulled up the sheet to give me room to turn. I gave him something too. A little flash. Not intentionally of course 🙂

At the end of it, he told me to take it easy for 2 or 3 days if at all possible. He said not to do anything strenuous because I wouldn’t have the energy. He was right! But I still had to go golfing later…

After I showered and dressed, I walked over to Milestones, which is right across the street from the Empress Hotel, in the Inner Harbour. There I met Michael and Dana and Gracie for lunch…they brought a whole bunch of birthday cards for me to open. We had a lovely lunch and I opened all of my cards, and then it was back into the Mustang for a drive all around Dallas Road where the hang gliders hang and the seagulls hang with them, where the Olympic Mountain range springs up dark blue against the light blue summer sky, and the dogs romp and the joggers jog. I sat in the back with Gracie as Michael drove so I could feel the wind racing around me…I stared up at the canopy of trees through the streets and smiled at everything and everyone. By the time we got home I was already exhausted!

After a bit of a snooze, Michael and I loaded up the Mustang with our golf clubs and headed to meet our friends Howard and Crystal and Elaine for a round of golf at Royal Oak. I couldn’t play worth beans! I was still feeling the result of my meat tenderizing…but it was okay. We had a lot of laughs, especially with my 50th Birthday balloon hovering over my golf cart. Most of my shots were “worm burners”, although I think I may have managed a good putt or two. After the game, we had a steak barbeque at the course, and then it was off to Howard and Crystals, where we had champagne and birthday cake, and they read verses that they had written for me and gave me more presents. It was so much fun. By 11pm I could barely keep my eyes open, so we drove home with the top down and then I finally crawled into bed.

It was over too quickly, but not soon enough. I guess that was the party girl and the 50-year-old girl having it out somewhere inside of me. The 50-year-old won that round…

Thanks again, to everyone who made it such a special day for me.
Now I start planning for next year!

IJ
(yes, I know I didn’t tell you whether my masseuse was cute or not… 🙂